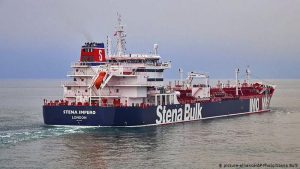 Dubai — Iran said on Tuesday that Britain might free its oil tanker Grace 1 soon in a maritime saga that has exacerbated frictions between Tehran and the West.

But a source for the government of British Mediterranean territory Gibraltar, where marines seized the tanker on July 4 on suspicion of violating European sanctions by taking oil to Syria, denied an Iranian report that could happen on Tuesday.

Tehran has denied its vessel was doing anything improper and in retaliation its Revolutionary Guards seized the British-flagged Stena Impero tanker in the Strait of Hormuz waterway on July 19 for alleged marine violations.

The deputy head of Iran’s Ports and Maritime Organisation, Jalil Eslami, said in remarks reported by state news agency IRNA that Britain was thinking of freeing the Grace 1 following an exchange of documents.

“The vessel was seized based on false allegations … it has not been freed yet,” Eslami said.

“We hope the release will take place soon.”

Iran’s semi-official Fars news agency, quoting unidentified Gibraltar authorities, said the tanker would be freed by Tuesday evening. A senior Gibraltarian government source said that was not correct, though earlier the territory had said it was seeking the de-escalate the situation.

The tankers’ affair has added to worsening hostilities since Washington pulled out of an international agreement curbing Iran’s nuclear programme and reimposed economic sanctions.