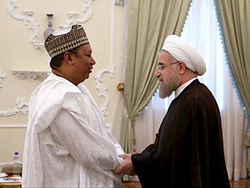 06 Sep 2016, Sweetcrude, Vienna, Austria – The President of the Islamic Republic of Iran, Dr. Hassan Rouhani, yesterday met with Mohammad Sanusi Barkindo, Secretary-General of the Organization of the Petroleum Exporting Countries (OPEC) in Tehran. The meeting was also attended by HE Eng. Bijan Namdar Zanganeh, Iran’s Minister of Petroleum.

Dr. Rouhani congratulated HE Barkindo on assuming the position of OPEC Secretary General. He welcomed his visit to Tehran to discuss the challenges, as well as opportunities, facing the global oil market.

Dr. Rouhani said Iran had suffered greatly under sanctions, and it was vital for the country to make up for its lost oil production. He added that OPEC has a responsibility to restore market stability, and Iran will continue to support these endeavours and help bring about fair prices that are conducive to both producers and consumers.

Barkindo offered his gratitude for Iran’s support of his candidacy for OPEC Secretary-General. He also conveyed greetings from Nigeria’s President, Muhammadu Buhari.

The OPEC-Secretary General stressed that he would continue to work with all Member Countries to overcome the challenges and uncertainties facing the current oil market. He called for maximum flexibility and accommodation among Member Countries to help achieve market stability.

Barkindo also underlined the key role Iran has played within OPEC to achieve market stability and fair prices in the past.

Earlier in the day, Barkindo and Zanganeh held a closed-door meeting at the headquarters of the Petroleum Ministry. The two conversed on various issues, including the current oil market situation and the importance of restoring stability, with HE Barkindo briefing HE Zanganeh on market developments since the last OPEC Ministerial meeting in June.

In a joint press conference after the meeting, Zanganeh reiterated his commitment to playing a constructive role in working with fellow Member Country ministers and the OPEC Secretary General to help restore market stability. He said that Iran wants a stable market and therefore any measure that helps the stabilization of the oil market is supported by Iran.

Zanganeh thanked Barkindo for his visit and stated that Iran will continue to offer its full support to him in his new role as OPEC Secretary General. He expressed his confidence in HE Barkindo, a skilled oil industry practitioner, and OPEC veteran, to achieve the common goals of the Organization.

HE Barkindo recalled that the first ever Secretary General of OPEC was Iranian, and thanked the country, for its leading role in establishing the Organization in Baghdad in September 1960, as well as its continued efforts to strengthen it.