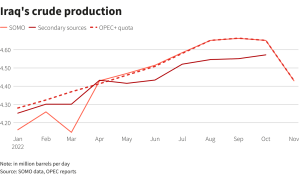 London — Iraq produced 4.43 million barrels per day (bpd) of crude in November, down by 221,000 bpd from October, data from state-owned marketer SOMO seen by Reuters showed on Thursday.

According to the production figures, Iraq’s output was in line with its quota under the OPEC+ agreement for November, as it has been since June.

But secondary sources used by the OPEC secretariat to determine compliance have placed Iraq’s production below SOMO’s own figures in May-October this year.