Is $71 as good as it gets for oil bulls this year?

18 March 2018, London — On the surface, things look good for oil producers. Global oil demand is set to grow at its fastest pace in three years and OPEC’s discipline in sticking to output cuts has been unprecedented.

All of this should help offset booming U.S. production.

But there are a few tell-tale signs in the oil market that paint a less rosy picture.

After shrinking consistently for months, global oil stocks began rising again at the start of this year.

But even before it became apparent that inventories had increased, the oil futures market flipped into a structure that usually reflects the perception that supply is greater than demand – known as contango, when current-month prices are weaker than forwarding prices.

The International Energy Agency and the Organization of the Petroleum Exporting Countries this week reported an increase in global inventories, which declined for seven months in a row, thanks to OPEC’s coordinated 1.8-million-barrels-per-day joint production cut with other major exporters such as Russia.

The IEA, OPEC and the U.S. Energy Information Administration, the third major forecasting body, have all underestimated the growth in production outside of OPEC and specifically, in the United States.

For the first time since the effects of OPEC’s production cut kicked in around mid-2017, the three agencies are predicting the global oil market will face a surplus in 2018. 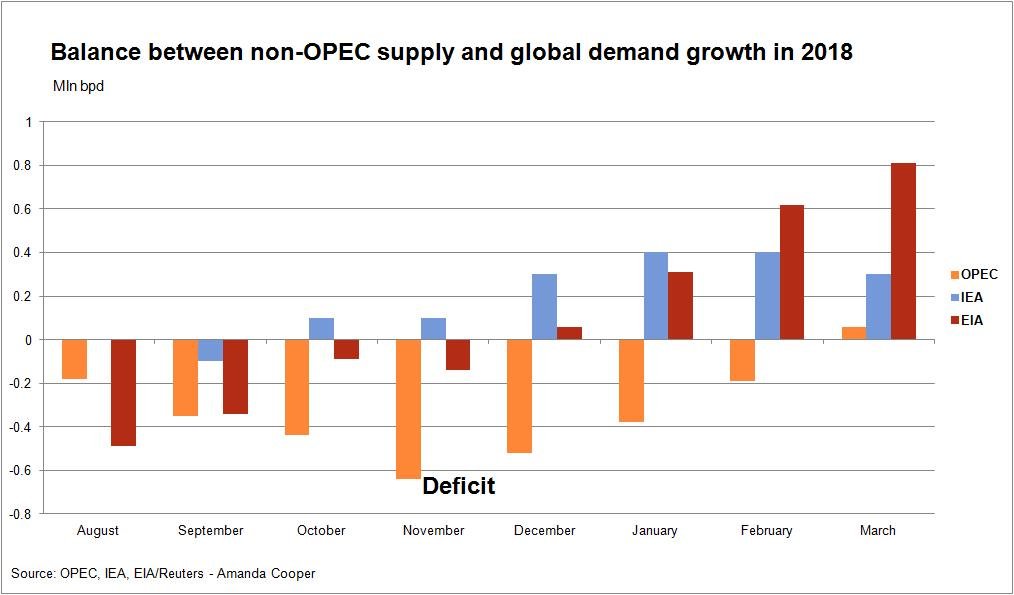 The benchmark Brent crude futures contract LCOc1 hit a near-three-year high of $71 a barrel in late January and might now struggle to move much above its current levels around $65, analysts say.

“We believe the oil market is more fragile than it seems. Supply is swiftly catching up to strong demand growth,” said Norbert Ruecker, head of commodity research at Julius Baer.

“According to our estimates, the global inventory tightening trend should slow and eventually reverse with storage levels no longer declining but again rising later this year.” 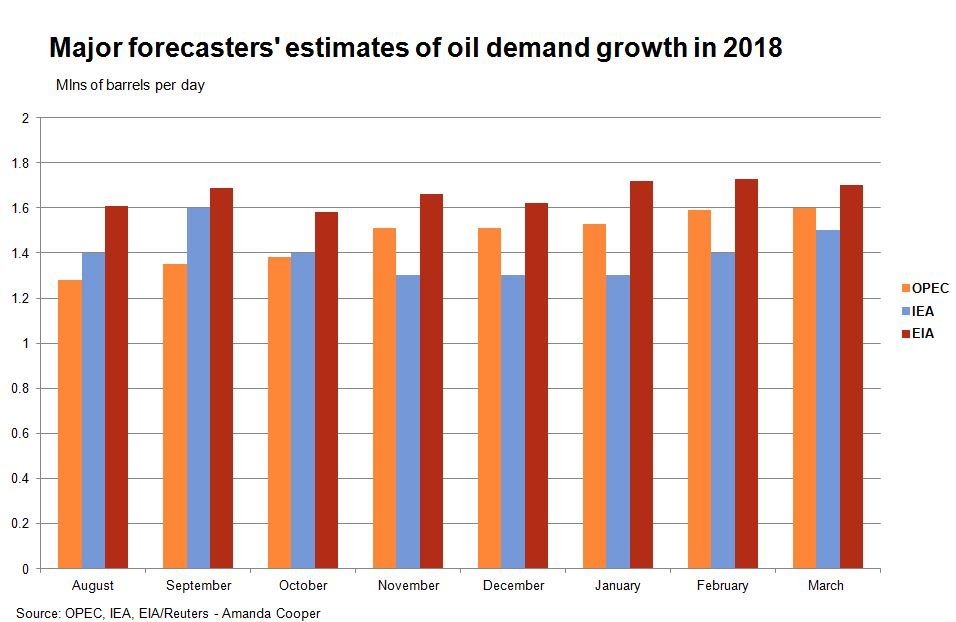 Inventories in the world’s most industrialized nations, the easiest to monitor, have fallen by nearly 200 million barrels in the last 12 months, according to the IEA. But as the pace of decline wanes, so could the patience of oil investors.

When prompt futures contracts trade above those for delivery further out, a pattern known as backwardation, it pays to bet on a price rise, but a reversal into contango wipes out that profitability.

Despite U.S. inventories falling to their lowest in two years, the U.S. futures market is back in contango, albeit by a modest 5-10 cents a barrel. Brent, with a backwardation of 16 cents, is not far off. 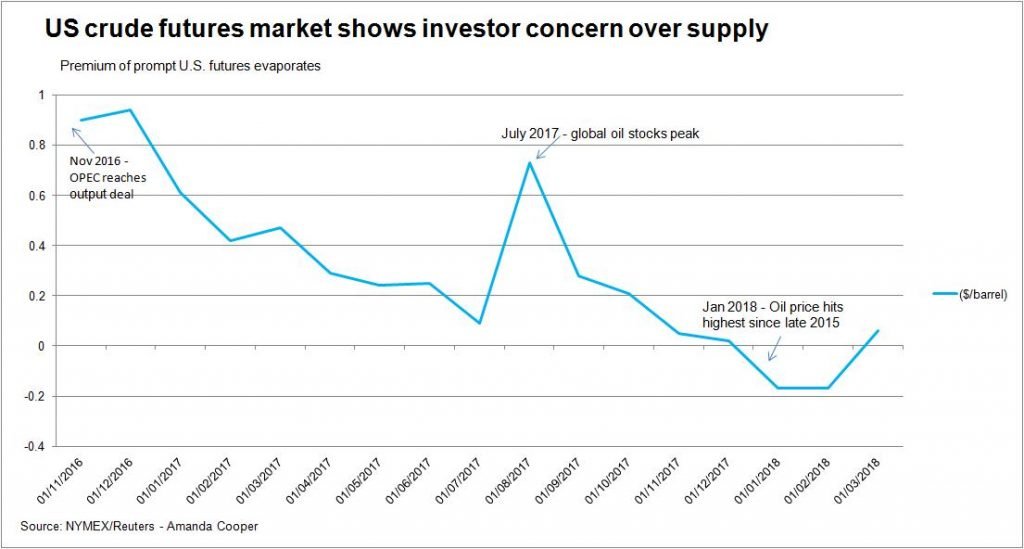 “Contango and backwardation are both a fundamentally physical signal in terms of surplus, but they are also strongly impacted by changes in speculative positions,” SEB head of commodity strategy Bjarne Schieldrop said.

“All the talk of OPEC saying the market will be in surplus this year and booming shale oil production in the U.S. … has placed a cap on the upside,” he said.

“Prices have tried to move and have not been able to … for (U.S. crude) and Brent you still have some $80 billion in net long positions riding on the positive roll-yield and if that turns negative, then you have a lot of dollars suddenly in negative earnings, which means a sell-off.”

This could push Brent below $60 in the near term, he said.

It might not be all doom and gloom, even with the beginnings of an inventory build. Not all forecasts turn out to be correct, noted Richard Robinson, a fund manager at Ashburton Investments.

“We think demand is too bearish, or not bullish enough, and possibly people are extrapolating too much (from U.S. output),” he said. “We think we could end the year with production higher than it is now, but we think (the forecasters) might be overcooking their supply growth expectations.”