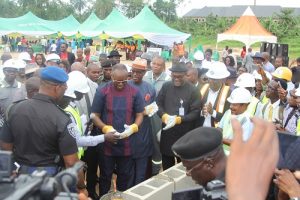 *Govt to extend project beyond N/Delta

29 April 2018, Sweetcrude, Lagos — The Minister of State for Petroleum Resources, Dr. Emmanuel Ibe Kachikwu on Friday performed the ground-breaking of the Nigerian Oil and Gas Park being developed by the Nigerian Content Development and Monitoring Board, NCDMB at Emeyal-1, Ogbia Local Government Area of Bayelsa State.

The park will generate about 2000 jobs when it begins full operation and creates a regional low-cost manufacturing hub that will produce equipment components and spare parts to be utilised in the nation’s oil and gas industry.

The Board is working to establish oil and gas parks in five oil-producing states, with the Emeyal-1 project the second to take-off.

A similar ground-breaking event was held early March at Odukpani, Cross Rivers State. The other sites are located at Oguta in Imo State, Ikwe-Odio in Akwa Ibom State as well as in Delta State.

Speaking at Emeyal-1, the Minister stated that the Federal Government plans to develop similar projects in other parts of the country so as to extend the benefits to more Nigerians. According to him, “We will work with the Board and provide everything that is needed for the projects. After the development of the five pilot parks in the Niger Delta states, we will extend this very innovative idea to other parts of Nigeria where oil has either been found or is being explored.”

Kachikwu affirmed that “this initiative will send a message to investors that Bayelsa is ready for oil and gas business and drive home the point that the park will bring about localisation of indigenous companies, where fabrication, pipe milling, procurement hubs and oil and gas related technologies will flourish.”

He informed that the park will be provided with an uninterrupted power supply to address the electricity challenge which often besets most Nigerian manufacturers and businesses.

The Executive Secretary described the ground-breaking as a great step towards achieving one of the Board’s key mandates, adding that “this project will positively impact Bayelsa State in general and Emeyal community and its environs in particular. Citizens of the host community and environs will also benefit from on-the-job training opportunities.”

Wabote appealed to the host community to support and defend the project so it will be completed on schedule, warning that it will be relocated if it faces unreasonable demands and disruptions.

In his remarks, the Governor of Bayelsa State, Honourable Henry Seriake Dickson represented by the Secretary to the State Government, Mr. Kemela Okara commended NCDMB for siting one of the oil and gas parks in the state. He acknowledged that NCDMB had been a veritable partner of the State Government and had contributed to the growth and development of Bayelsans.

Okara asserted that the Government was determined to industrialize the state and will support every effort designed to complement its efforts.

“As a state, we will support the execution of this project and ensure there is a peaceful and conducive environment to aid the speedy completion as planned.”

The Obanobhan III of Ogbia Kingdom, His Eminence, King Dumaro Charles-Owaba assured the Board that the community is peaceful and the project will not be disrupted.

He solicited that more investments should be sited in the community to create employment opportunities for youths.