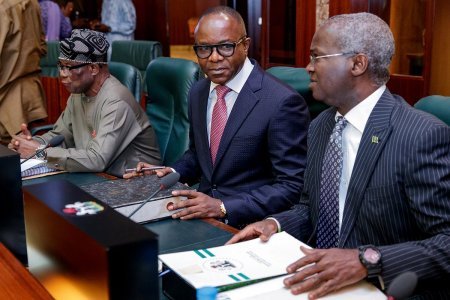 Kachikwu told State House correspondents at the end of the meeting in Abuja that the Council approved a memo for the award of the pipeline contract he earlier said was awarded by Baru to a Chinese firm.

The contract is for the installation of the new Ajaokuta-Kaduna-Kano, AKK, gas pipelines under a public-private partnership basis.

Kachikwu said he presented the contract to FEC for approval again to correct the infringement of due process by the initial approval.

When completed, he said, the project would allow holistic movement of gas from the South to the North for increased gas utilisation and power generation.

According to him, “We presently have trapped power, trapped gas, all in the southern corridors that is going nowhere because of lack of infrastructure. So, that contract has now been awarded. But, remember that was partially done. This is a contract that has lasted over 13 years. So we got approval for that, and so that is going forward very nicely.”

Asked why he had to present the contract again to FEC for approval, Kachikwu said that it was to correct the irregularity he pointed out in his leaked memo to the President.

“What I wrote to the President in my memo, which was presented to FEC, was to remind him that these were some of the contracts he had already approved. What I complained about was about due process not being followed in the initial approvals, obtained without seeking my concurrence or input.

“The due process is that before contracts go to FEC, they should go first to the Board of the company, in this case, NNPC, to give everyone the opportunity to make their inputs,” he explained.

He added that, “What I did was an inverse approval process, which is post-the-fact, by taking it to the Board before the FEC. After the NNPC Tenders Board, the right thing to do should be for the contracts to go to the minister, who should even have an input before the Tenders Board finishes its work.

“But because the contract value exceeds the $20 million threshold, the minister has the obligation to take it back to the other Board members for them to review it. Whatever is their opinion would be included in the recommendation by the minister to the President, to guide his decision.

“Based on the President’s input as the full Minister, then the contract would go to FEC. That is the due process of how things should be done,” he added.

The minister, who said he was reluctant to talk about the issue again, said he agreed to speak so as to afford Nigerians the full benefit of what happened.

“I don’t want to go through the whole controversy again. It took a lot out of everybody. We managed to calm things down. All what I did was to correct the wrong in the process inversely by taking it to the Board members to enable them be aware of it and make their inputs,” he said.

Kachikwu said apart from the AKK pipeline contract, the FEC also awarded a contract to a consortium for the Odidi Pipeline Project from Warri and the Southern marshlands, to move about 364 million cubic meters of additional gas to be produced through the Niger Delta, to be fed into the AKK pipeline.

He said the contacts were all part of the government’s gas gathering system.

“So the two contracts taken together, basically will boost gas delivery in Nigeria, for power generation and for the first time begin to take very definitive steps towards the movement of Nigeria from being a crude oil nation into a gas environment,” he said.