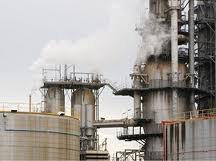 04 April 2012, Sweetcrude, ABUJA – Less than one month after the Minister of Petroleum Resources, Mrs. Diezani Alison- Madueke convened a stakeholders’ forum in Abuja to x-ray the challenges confronting the nation’s three traditional refineries, signs of surge in domestic refining capacity appeared in the horizon Tuesday with the announcement that production of premium motor spirit at the Kaduna Refining and Petrochemical Company, KRPC has hit a 10 year high of over 2.5 million litres per day.

He said, “I am excited because something close to a miracle has happened to KRPC. We have seen the refinery increase production from very low level to what we have today which is about 30 million litres of PMS per day which is quite commendable and I hope that the staff will continue to perform the way they have done so far.”

Engr. Chukwu noted that the implementation of the Lights-on- scheme via quick intervention and speedy repairs has ensured that for the first time in 14 years, the Fluid Catalytic Cracking Units, FCCU, of the three refineries are in operation simultaneously.

Conducting the GED round the facility, the Managing Director of KRPC, Engr. Bolanle Ayodele noted that the increase in PMS production was achieved after the successful re-streaming of the FCCU as well as the Crude Reform Unit, CRU, of the refinery.

“The FCCU was re-streamed on the 5th of February, 2012 and has operated steadily since then. The CRU which was shut down late November 2011 for re-tubing of the combined feed/reactor effluent heat exchangers was re-streamed on the 31st of March 2012’. With the units in operation, our Gasoline Production has improved from 1.5 million litres per day to above 2.5 million litres per day and still counting,’’ the KRPC MD stated.

He acknowledged the support of Engr. Chuwkwu in this regard stating that the new production figure for PMS was attained after seven failed previous attempts at re-streaming the FCCU.

“Inspite of those difficulties encountered, the GED was always full of words of encouragement even when others were pessimistic and that went a long way in boosting the morale of KRPC staff,” Engr. Ayodele stated.

He however called on the GED to help tackle some challenges facing the smooth running of the plant which include; lack of imported paraffinic crude for the Lubes plant, non-availability of reliable crude stock, inadequate funds releases to support operations among others.