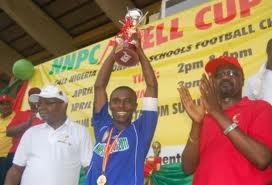 The game went into penalties after both teams could not secure a winner in extra time. Kwara Academy’s keeper, Adeyinka Adewale was the hero of the day as he stopped three penalties to secure the trophy for the debutant.

For emerging winners, Kwara Academy ran home with N2.5 million, each player got N50,000 and qualifying ticket to represent Nigeria at the United Kingdom Youth Tourney, ‘Kings Cup’ in September later this year.

National Foundation College also went home with N1.4 million. Each player got N45,000 while the team will represent Nigeria at the Intra Secondary Schools Sports Championship billed for Dubai this year.

The golden boot went to James Igbetemi of National Foundation College and Adeshina Gbata of Kwara Football Academy, with 7 goals each.