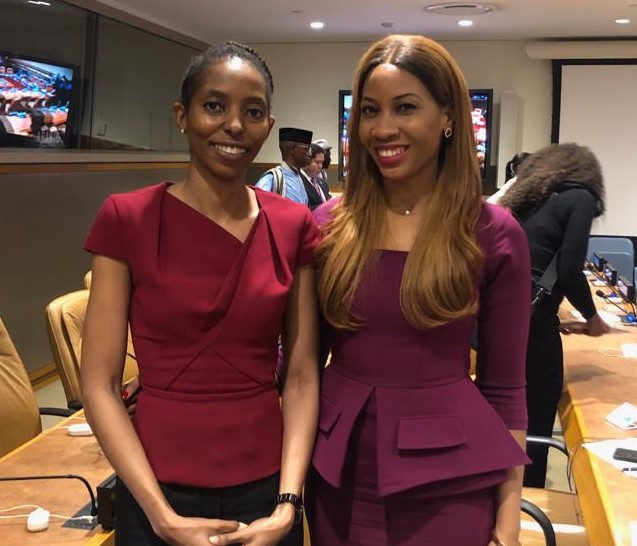 *Managing Director of LADOL, Dr. Amy Jadesimi and the Director, Sahara Group, Pearl Uzokwe at the launch of AFRICAN Influencers for Development with UNDP in New York, United States.

Lagos — The Managing Director of Lagos Deep Offshore Logistic Base, LADOL, Dr. Amy Jadesimi anlong with other African influencers were selected to speak along side the Deputy Secretary-General of the United Nations, Amina Mohammed at the historic launch of Africa Influencers for Development, AID at the ongoing United Nations General Assembly in New York United States of America.

Africa Influencer for Development, AID is a bold new platform to bring Africans together in partnerships to drive the continent’s development with the support of United Nations Development Programme.

Dr. Amy Jadesimi was selected to join this movement because of her proven commitment to Africa’s progress and her firm believes that Africa’s power and prosperity is in partnerships.
​
AID seek to implement new ways to put Africa at the heart of its own development by harnessing Africa’s creative, intellectual and entrepreneurial energy through a powerful coalition of current and future African influencers in business, academia and the arts. Put simply, the term ‘AID for Africa’ is taking on a new meaning for a new Africa.​
​
Speaking at the event MD LADOL stated “Ladol is a company that has been launder for achieving many firsts, but actually this is Increasingly an indicator of how few strong prosperous innovative indigenous companies we have in Nigeria. I’m so excited and honoured to be included in the groups of CEOs and African business leaders in this room, but most of us are still white elephants. In short we should use this initiative to ensure that companies like LADOL become the norm and not the exception.

“That work must be done by Africans from across the continent in private and public sector working together. One hallmark that distinguishes sustainable business models is that they are grown and made strong by being part of a sharing collaborative environment. One of the other speakers here mentioned the need for a new type of competition in Africa- one where companies in the same sector collaborate to maximise the percentage of the market served by AFRICAN companies through joint market analysis, engineering of solutions, lobbying etc as to paraphrase Mr. Mark Eddo, (International Broadcaster & Lead​ Consultant, RBA) – we Africans can not plan to become prosperous alone”​
​
“I agree with all the comments I’ve heard here today and it’s a relief not to be the only African in the room making such statements. However, I would add that we have to work hard to change the perception of Africa not to convince the world that we are worthy but first and most importantly convince ourselves,” the MD said.
​
Dr. Amy added that LADOL’s biggest challenges have been caused by Africans who didn’t believe a Nigerian could or would do what we have done stating that “at every hurdle we have been met with scepticism and naysayers, sometime most vocally amongst our own people. Very often this is not about self interest it is about a lack of self belief. On the other hand, as I always say, working in Nigeria for 15 years has restored my faith in humanity.

“Over the years brave, visionaries in public and private sector have risked much to do the right thing where LADOL is concerned because they believed it was possible for a Nigerian company to outperform a foreign one and they therefore believed that LADOL would create the jobs and add the value we have gone on to create. I have seen Nigerians, who had nothing to gain and much to lose stand up time and again when given the opportunity to make the right choice for Nigeria. Imagine what would happen if the systems encourage and enabled correct actions across Africa when we change our narrative about ourselves I know that will lead to a rapid change in the systems that currently do not serve the continent well – which will rapidly lead to double digit economic growth and job creation across the continent.”​