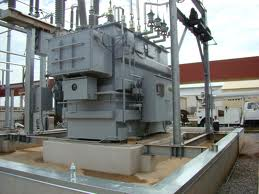 28 February 2013, Sweetcrude, LAGOS — The Federal Government, yesterday, gave a boost to power supply in the country with the acquisition and installation of three units of 15 MVA (Megavolt Ampere) injection sub-stations in Lagos.

Olotu said there were currently about 491 power projects across the country, while about 40 of the projects had been completed.

He however added that all the others yet to be completed have reached advanced stages of completion and would be completed before the end of the year.

The NDPHC helmsman disclosed that the Federal Government set a target of June this year for the completion of all distribution projects, while all transmission projects and about 99 per cent of all generation projects are expected to be completed by the end of the year.

According to him, the federal government is set to begin an inspection of all the projects site across the country by March this year and warned that it might sanction contractors found to be delaying in the delivery of their project.

“In March this year, the Vice President has announced he is sending out a crack team of project monitoring group to visit all the projects sites, so that actions can be taken on the spot if we find that the contractors are not meeting up with target given to them.

“While doing this, we are aware that it is also important that the delivery should be known to be actually effective and qualitative, not delivery that is fast and then as we move back and go away after commissioning, they say something has broken down. That is fraud. We want the contractors to deliver quality work.

“But the time for delay is over. No more delay again on this project. Every contractor has no excuse on why they should not deliver on their project,” he said.

On the issue of supply of gas to the power stations, Olotu said all stakeholders in the power sector are working together to ensure that the challenges facing steady power supply, especially availability of gas, is dealt with.

He said the installation of the sub-stations and switchgears will help minimize load shedding and tackle the issue of epileptic power supply.

Amoda pointed out that the new equipment are strategic, especially as they cater for the need of strategic areas of the state, areas.

According to him, the benefiting communities have started feeling the impact of the projects in terms of improved power supply.