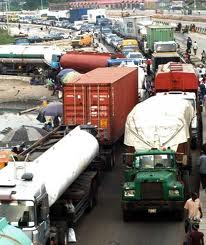 24 February 2012, Sweetcrude, LAGOS – Lagos State Government, Thursday, made good its threat to forcefully remove all fuel tankers parked indiscriminately on the Oshodi-Apapa expressway at the expiration of an ultimatum.

The state government, last Sunday, ordered all the fuel tanker drivers to remove their vehicles from the expressway within 72 hours. At the expiration of the ultimatum, the tankers remained on the highway.

In over four hours of operation, a combined team of the Lagos State Taskforce on Environmental Offences, led by the Ministry of Transportation, engaged in dislodgment and removal of over 120 abandoned and stationary articulated vehicles parked along the expressway even as it raised an alarm over an impending outbreak of epidemic following discovery of unhealthy state of drainage along the axis.

The team arrived the area about 11 a.m and left about 3 p.m.

The removal of the fuel tankers from the Oshodi-Apapa expressway is part of measures to eliminate the incessant carnage and terrible traffic snarl often caused by the activities of the tanker drivers as well as ensure compliance to the safe traffic rules and regulations of the state.

Lagos State commissioner for Transportation, Mr Kayode Opeifa, while reiterating that the exercise would continue, said the state government, being a responsible and responsive one, would ensure that every citizen moves freely on the axis and not only the tankers or trucks carrying containers.

He added that the enlightenment and enforcement exercise would also continue as government would not relent until tanker drivers park on one lane of the service lane.

Opeifa, while calling on the public to take possession of the road, urged them not to hesitate to inform the Ministry of Transportation of any broken down or abandoned tankers and trucks on Apapa–Oshodi Expressway.

Opeifa, who lamented the environmental nuisances caused on Apapa- Oshodi Expressway, including vehicle repairs on the road and excreting in the drainages, urged leaders of the Petroleum Drivers Tankers Nigeria (PTD) Branch of the National Union of Petroleum and Natural Gas Workers (NUPENG) to educate their members and ensure that the tanker drivers desist from unhealthy attitude as this could pose danger to the healthy living conditions of Lagos residents.

The Commissioner who said the state government was not unaware of the problems posed by the failure of petroleum distribution system in the country, particularly in Lagos, however, urged the Ministry of Petroleum and the Nigerian National Petroleum Corporation (NNPC) to rise to the challenge of petroleum distribution and ensure that only tankers, which adequate provision have been made for, are issued with tickets to come to Lagos to load petroleum products.

He said the state government was uncomfortable with a huge number of tankers that flood Lagos, blocking the road when it is not time to load fuel.

The commissioner said a broader stakeholders’ meeting, to include tank farm owners, would be convened soon to find a lasting solution to the problem.

He urged all tanker drivers to adhere strictly to the directive and maintain only one lane on the service lane as the State Government would not hesitate to enforce traffic rules and regulations to the letter whenever they violate the law.

Lagos Zonal Secretary of PTD, Comrade Adebayo Atanda, said other tankers that could not be accommodated in the three locations were asked to find where to park and that they must not park on the expressway.

He also alerted that if urgent steps were not taken to address the subsidy controversy currently being probed by the National Assembly, there would be acute scarcity of products in the country because marketers were not importing products.

Atanda said the few products available were the reserves some of the marketers had in their depots.

According to him, “We have asked them (tanker drivers) to leave the Apapa Oshodi expressway; the Commissioner for Transport was around this morning (Thursday) to monitor the relocation of the tankers.

“He started from Toyota down to Mile 2 and from there to Ibru jetty. He wanted to go to Apapa, but the road was blocked by articulated vehicles. He saw that it was not our problem, but articulated vehicles, popularly known as trailers and other heavy trucks.”

The state government, also Thursday, read the riot act to Power Holding Company of Nigeria (PHCN), Nigerian Telecommunication Limited and other telecommunication companies over indiscriminate laying of underground cables in Apapa and Victoria Island areas of the state, saying it’s a constraint to government’s efforts at reducing flooding.

Commissioner for the Environment, Mr Tunji Bello, during an inspection of clearing of drainage channels on the Island, explained that PHCN and the telecoms companies have ignored government directives for relocation of the cables.

He said: “There are several PHCN and telecoms cables causing limitation to the flow of water in Apapa and Lagos Island. We have written to them to find a way out of the logjam, but they have been ignoring us or demanding for money. The cables are reducing the capacity of the channels and also posing a challenge when clearing the drainages.”

“If the cables got damaged during the removal process, the state government will not be responsible for that. They will have to fix their cables themselves. This is because they met the drainage well constructed before they laid their cables by the side. We can no longer sit by and watch them cause damage to the state drainage system.”

“As a citizen of the country, they have the right to challenge the state at the law court. We are starting the removal of the cables immediately. The situation was also be noticed in Apapa. Almost all the collecting drainage systems in entire Apapa are filled with PHCN and telecommunication cables. The cables are the cause of flooding in Lagos State despite the effort of the state government to maintain a flood free society”.