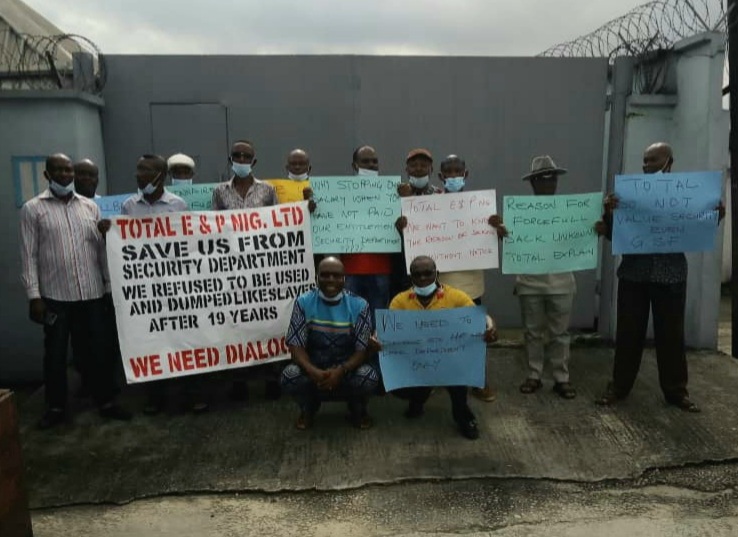 *Some of the protesting legionnaires

Port Harcourt — Scores of legionnaires on Wednesday barricaded the entrance to the Port Harcourt office of French oil firm, TotalEnergies, over what they described as undue retrenchment, without prior notice and negotiations.

The legionnaires, 49 of them with placards and banners bearing different inscriptions, such as “We need dialogue with HR and Legal Department”, peacefully marched from Mothercat junction in Trans Amadi to the company’s gate, while singing, clapping and making prayers to God.

The protesters said they were working as security guards at different flow stations and facilities operated by Total both offshore and onshore, before they were sacked at the end of August, 2021.

Leader of the protest, Mr Emmanuel Emuze, said some of them have served the company for over 19 years, inhaling all manner of destructive gases and chemicals, without commensurate benefits.

Emuze said for over 13years, there had not been salary increment, adding one of their colleauge died as a result of the shock from the news of the retrenchment.

“We want to know why 49 of us were forcefully being sent away from Total, after long years of service.

“Out of the 49 persons immediately the news came on the sudden retrenchment one person died and one person has been called back to resume work.

“For 13 years of service there has been no increment of salaries, we have been denied may benefits ranging from PC tablets, covid 19 palliatives that other contract staff of the company benefited from.

“We have made a lot of efforts to discuss with the security management they have turned us down and now we have decided that we have to make our presence known to bring our grievances to the human resource and legal departments.

“We are not making trouble, we want dialogue, a round table discussion. We have served under the rain during the floods in the different wells we were posted to. For a good number of years and we wonder why no official letter was issued to confirm our retrenchment.”

Another protester, Irokah Kingsley, said the protest was imperative as all efforts to dialogue with the Human Resource department of the company proved abortive.

“As one of the representatives of the legionnaires, accessing the office has been very difficult; we were told our messages have been sent to the human resource department but no date was given.

“We were able to lay our complaints to the head of security, who said he would send a feedback through the head of legionnaires.

“We have reached out to the head of legionnaires but there was no response, instead we got feeds that if we come to the gate we would be confronted by the military; worse off we will not be allowed to see anyone.

“Our demand is to meet with the human resource and legal department and the head of security on a round table.”

A Security representative of the company, Olabode Fagbemi, who came out to address the protesters, said there was no need for the blockade of the facility, while urging the protesting legionnaires to nominate three representatives for a dialogue.