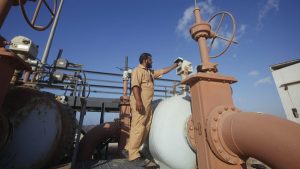 London — Libya’s Sharara oilfield, the country’s largest, was forced to shut down after a valve on the pipeline linking it to the Zawiya oil terminal was closed late Tuesday evening, state-owned National Oil Corp (NOC) said on Wednesday.

The shutdown prompted NOC to declare force majeure on loadings of the crude grade on Wednesday, a document seen by Reuters showed.

The exact location of the valve on the pipeline was not immediately clear and NOC said “unidentified perpetrators” were behind the valve closure.

The field accounts for a quarter of Libya’s oil production.

NOC said staff from its subsidiary, Akakus Oil Operations, attempted to reopen the valve “but were prevented from doing so by a local armed group”.

It added negotiations were underway to restart production as soon as possible.

The field, which produces 290,000 barrels per day (bpd), was shut down for a few days from July 19 after an unknown group blocked a valve on the pipeline to Zawiya in the Hamada area in western Libya.

That shutdown also prompted NOC to declare force majeure on loadings of the crude grade. It was then lifted on July 22 after the valve was reopened.

Also Read: BP has no plans to take its tankers through Hormuz

Prior to the shutdown, Libya was producing 1.2-1.3 million bpd, a six-year high for the OPEC member which has struggled to return to a pre-civil war capacity of 1.6 million bpd.

“This latest incident only serves to highlight the fragility of our security environment and total disregard for the impact of such acts on the lives of everyday Libyans,” NOC chairman Mustafa Sanalla said in the statement.

He added the shutdown at Sharara severely disrupted power supply to the national grid as the field provides crude to the Obari power plant.

He said alternative arrangements were being prepared to ensure continued operations at the plant.

Sharara also supplies the 120,000 bpd Zawiya oil refinery, adjacent to the oil export terminal. But that plant has been shut for weeks because of power supply issues.