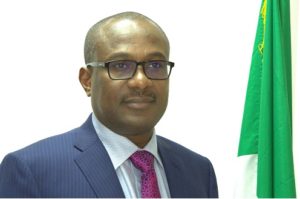 01 April 2018, Sweetcrude, Lagos — The adoption and implementation of local content policies in key sectors of the Nigerian economy will address the high unemployment rate in Nigeria, the Executive Secretary, Nigerian Content Development, and Monitoring Board, NCDMB, Engineer Simbi Wabote has said.

He made this assertion last week in Port Harcourt, Rivers State at an event organized by the Institute of Directors, IoD, Nigeria, where he made a presentation as the guest speaker.

In his presentation titled, “Addressing Unemployment: Local Content Option”, Wabote regretted that for many years, until lately, Nigeria had regarded crude oil as a commodity, instead of a resource – a situation which resulted in the loss of all in-country value adding activities and opportunity to capture the full benefits of the derivatives of crude oil. He noted that the enactment of Local Content Law in the oil and gas industry and its implementation has become a game changer, helping Nigeria to claw back work, services and spend which used to leave the country to other parts of the world. He reiterated that the essence of local content policy is “domiciliation and domestication”.

Stating that the oil and gas sector is not a huge employer of labour, compared to Agriculture, the Executive Secretary commended the current emphasis on Agriculture and diversification by the current administration.

He also lauded the Federal Government’s reinforcement of the Local Content Policy through the issuance of Executive Order 5, designed to boost local content practice in other critical sectors of the economy.

He argued that with the huge unemployment figure of about 16 million from the Bureau of Statistics, NBS, a staggering number equal to the total population of three West African countries of Sierra Leone, Togo, and Liberia, Nigeria needs to extend local content practice to other critical sectors like Agriculture, ICT, Construction, Power and Manufacturing in order to tackle the scourge of unemployment in the country.

Wabote also argued that for Nigeria to derive full benefits from Agriculture, it must look at the various derivatives across the Agricultural supply chain as to create jobs and boost the economy.

He cautioned, “we must not repeat the mistake of ‘commodity trading’ with agriculture”.

Speaking further, he enjoined the Directors to be circumspect about agreements with foreign development partners and financiers and ensure that their companies do not pen contracts which would lead to loss of jobs for Nigerians.

Earlier in his opening remark, the Director-General and Chief Executive Officer of IoD, Nigeria, Mr. Dele Alimi indicated that the Institute exists to promote good corporate governance. Similarly, the Chairman, Port Harcourt Zone of IoD, Sir Innocent Harry in his welcome address stated that the Institute was interested in finding solutions to the problem of youth unemployment hence the decision to invite the guest speaker.