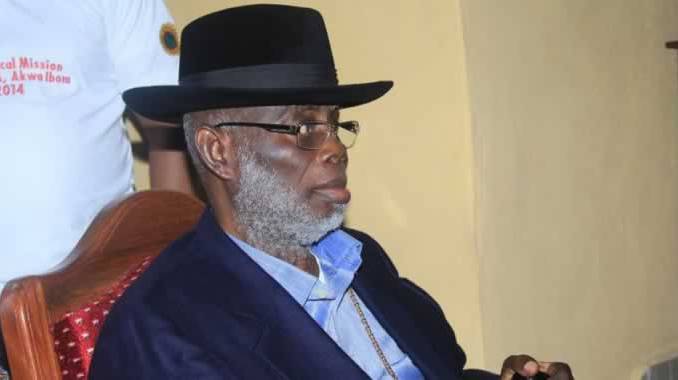 Mkpoikana Udoma
26 November 2017, Sweetcrude, Port Harcourt – The Chairman and Chief Executive Officer of indigenous oil producing company, MoniPulo Petroleum Development Limited, Chief O.B Lulu-Briggs, escaped assassination attempt on Saturday at his home town in Abonnema, Akuku-Toru Local Government Area of Rivers State.
Lulu-Briggs, who is also the regent of Abonnema, according to reports, had visited his home town for a peace and reconciliation meeting between chiefs, opinion leaders and elders of the area in respect of the crisis rocking the Council of Chiefs in Abonnema.
Lulu-Briggs was recently appointed as Chairman of the Council in acting capacity, following the suspension of the former chairman, Chief Disreal Bobo-Manuel, over allegation of witchcraft levelled against him.
Based on the development, Lulu-Briggs had visited Abonnema in order to broker peace, but was held up by hundreds of youths who attacked his convoy and damaged several cars, including the bullet proof vehicle conveying him.
Speaking on grounds of anonymity,  a chief, who witnessed the incident explained that youths numbering over 200 gathered at the community palace, took over the scene immediately Lulu-Briggs’ convoy arrived and started shooting guns and hauling stones and other dangerous objects at Lulu-Briggs’ team.
“Some youths we do not know attempted to kill High Chief Lulu-Briggs when he came to Abonnema for a peace and reconciliation meeting.
“They gathered round his convoy, destroyed cars in his convoy but he was saved because his car is bullet proof. They were shooting guns. We do not know what their annoyance is, but we know they were hired.”
Meanwhile, Chief Lulu-Briggs has sued for peace in Abonnema Kingdom, stating that violence and killings would not resolve the issues surrounding the chairmanship of Abonnema Council and development of the area.
Lulu-Briggs, who spoke through Chief Ibim Iyibo Young-Briggs, noted that there was need for reconciliation of all the factions in he crisis, expressing regrets over poor infrastructural development in the area.
“I want to call for a dialogue of all concerned to immediately resolve all misunderstanding, acrimonies and for that matter grievances, so that Abonnema will be restored to its characteristics acclamation of York City,” he said.