Lagos — Mergers and acquisitions (M&A) deal activity in the oil and gas industry witnessed a decline in terms of value in Q1 2022, despite favorable production economics, according to GlobalData. 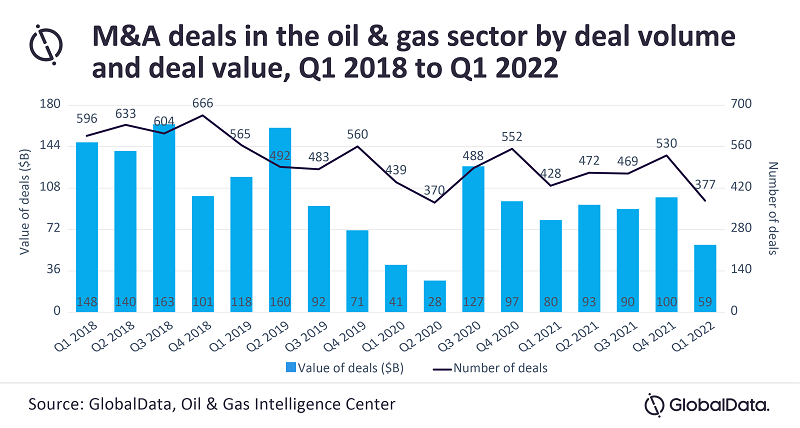 The leading data and analytics company notes that the decline was observed across most regions except China in the Asia-Pacific (APAC) region, where the deal value in Q1 2022 more than doubled compared to Q4 2021. However, China witnessed a fall in the volume of oil and gas deals over this period.

According to GlobalData’s latest report ‘Global M&A Deals in Q1 2022– Top Themes by Sector’, $59 billion worth of deals were announced in the oil and gas industry in Q1 2022, a fall of 41% from Q4 2021. The count of billion-dollar-plus deals dropped to 11, compared to 26 such deals in the previous quarter.

Ravindra Puranik, Oil & Gas Analyst at GlobalData, comments: “The shale theme saw a significant number of deals being undertaken in this quarter, following a steady rise in oil prices. The most notable among them was the $6 billion merger of Oasis Petroleum and Whiting Petroleum. The merger resulted in a new entity with combined acreage of approximately 972,000 acres in the Williston Basin shale play. Similarly, Chesapeake Energy consolidated its position in the Marcellus shale through the acquisition of two companies—Chief E&D and Tug Hill—for a combined value of $2.6 billion.”

In the midstream and downstream sectors, several companies strengthened their positions in emerging markets through M&A in Q1 2022. For instance, Fluxys’ and EIG’s joint majority acquisition of GNL Quintero, the operator of Chile’s largest regasification terminal, was one of the prominent deals in the midstream sector. Another example includes the MOL Group acquiring 417 petrol stations from PKN Orlen, thereby becoming the third largest player in the Polish fuel retailing market with 2,390 filling stations.

Puranik says: “Emerging economies are characterized by rapidly growing national economies that make attractive targets for market expansion. These countries tend to exhibit faster energy demand growth, which is met through domestic as well as overseas hydrocarbon sources. For instance, Chinese company CNOOC acquired a 5% stake in the Buzios oilfield from Petrobras for $2.1 billion, to benefit from the growing potential of the pre-salt Santos Basin.”