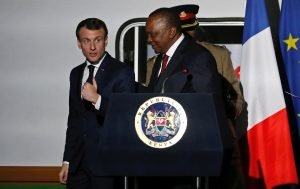 Nairobi — On a trip to East Africa last week, a beaming French President Emmanuel Macron was driven through the grounds of the Kenyan president’s official residence in a locally assembled Peugeot 3008 car.

Two days earlier, he toured churches hewn into the rock in Ethiopia. On a visit last year, he went to a Nigerian nightclub.

Macron, 41, is trying to recast the style of France’s engagement in Africa, where it was once a colonial power, hoping that building warmer cultural and personal ties will help boost business, trade and investment.

He signed contracts worth about 2 billion euros ($2.27 billion) while in Kenya, whereas British Prime Minister Theresa May did not conclude any on a similar trip last August.

A consortium led by Vinci secured a 30-year concession worth 1.6 billion euros to operate a highway linking the Kenyan capital and Mau Summit in western Kenya. Renewables firm Voltalia sealed a 70-million-euro contract for a solar power plant and an Airbus-led consortium won a 200 million euro deal for coastal and maritime surveillance.

But Macron’s four-day tour of Kenya, Ethiopia and former colony Djibouti showed how big a battle France faces in Africa, where China, Turkey and others have moved in quickly and aggressively, and competition is fierce from African countries.

In 2017, French exports to Kenya, a former British colony, were about $200 million — about half Uganda’s exports to its neighbor. China exported $3.8 billion, making it Kenya’s biggest trading partner.

The personal touch is vital when competing with China, French officials say.

“We’ve always used that form of diplomacy to implant ourselves,” said a French diplomat in the region. “But it becomes all the more important when facing China, because it differentiates us from their contract-oriented, low-cost, low-interest model of doing business.”

Trade figures across the continent show how tough the task ahead is for France, the world’s sixth largest economy.

From 2000 to 2017, the portion of all French exports that went to Africa halved from 11 percent to 5.5 percent. The main competition has come from Chinese goods, particularly in French-speaking West Africa.

Since coming to office in May 2017, Macron, who spent several months as a diplomatic intern in Nigeria in the early 2000s, has visited 16 African states, with two visits each to Mali and Morocco.

He has focused mainly on long-running relationships in French-speaking Africa, particularly the Sahel, where the responsibilities of the 4,500 French troops deployed there include fighting Islamic State. But he also has sought to build ties with Ghana, Nigeria, Kenya and Ethiopia.

Last week’s trip was a chance for Macron to show that “for too long we treated these East African countries like Banana Republics and they don’t like that,” said a former French envoy.

“They have resources, financial means and growth. “I’m not convinced that what is seen as ‘our Africa’ (France’s former colonies) can offer the business opportunities we have elsewhere on the continent.”

France is now seeking more targeted investments in specific sectors. The national development agency pours about 5 billion euros a year into Africa yet that barely scratches the surface alongside the cheap loans, big infrastructure investments and financing by China.

“It’s not easy to develop these economic links,” said Francois Gualme of the French Institute of International Relations, who worked for France’s development agency. “There’s a political presence, but the economic presence remains small.”

“FRANCE MUST COME BACK”

In Ethiopia, Macron said he wanted a new economic relationship, but Beijing has also been forging economic ties with Addis Ababa. China rebuilt, and financed through a multi-billion dollar loan, the rail link between the Ethiopian capital and Djibouti that was constructed by the French in 1917.

There are many signs of China’s presence, including Chinese laborers building skyscrapers or greetings of “Ni Hao” from children. Some Ethiopians resent the Chinese influence and hark back to when French and European influence was felt more widely.

Near the old French railway terminus in Addis Ababa, a group of former rail employees sat chatting in French at the Railway Workers’ Club in between games of petanque.

“You are from Paris, this is all from Paris,” said one who gave his name only as Getachew. “France must come back.”

That sentiment was expressed elsewhere in Ethiopia, where France has said it will share its expertise to develop tourism and rebuild the landlocked country’s navy.

“China is bad for us,” said Wonde, a 30-year-old taxi driver. “They bring China here — workers, food, women — and leave nothing for the Ethiopians.”