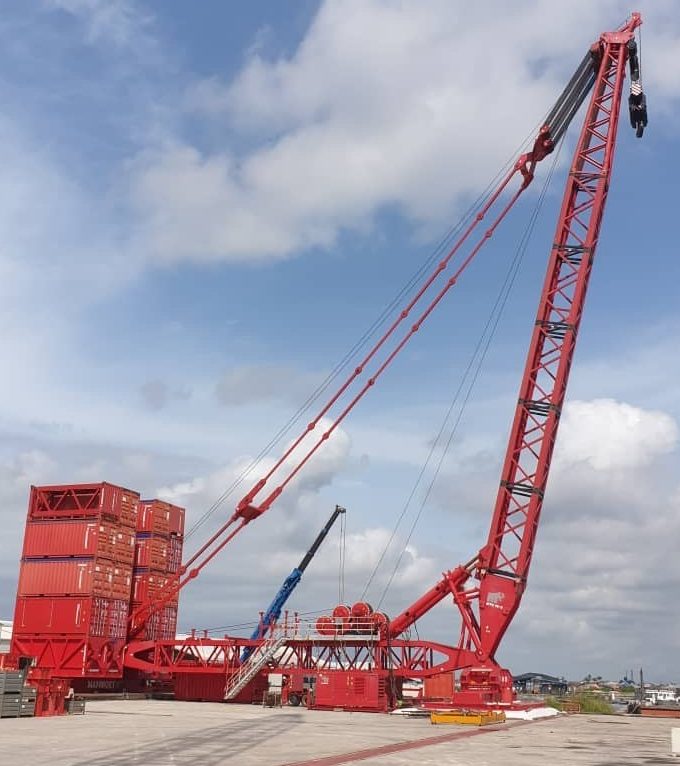 A statement from the company disclosed that the partnership is aimed at expanding LADOL’s capacity for project cargo handling and logistics for industrial sectors in West Africa and enables LADOL to utilize Mammoet’s crane fleet, project cargo handling and heavy lifting expertise along with project management services to provide clients with more comprehensive and cost-effective solutions.

With a load moment matching a 1,200 ton crawler crane or a large floating sheerleg, the crane enables loads up to 600 tons to be lifted to and from the quay from non-geared cargo vessels.

This lifting capacity is ideal for loading and offloading heavy items such as columns, vessels, reels, engines, and many other project cargoes.

The crane was been installed at the LADOL quayside in May 2020 and is the biggest installed shore crane of its kind in the region.

Earlier in the year, Mammoet mobilized a 250-ton crawler crane in support of Ladol’s quayside operations.

“The establishment of a long-term relationship between Mammoet and LADOL is an extremely exciting and significant development in terms of massively increasing local capacity. Thereby attracting general fabrication and complex construction projects, which are increasing in frequency across the Sub Region, to Nigeria,” LADOL’s Executive Director Business Development, Mr. Jide Jadesimi disclosed.

The Executive Director also described the process as a combination of teamwork, and dedication from LADOL and Mammoet staff.

“It was with great excitement that the Mammoet Terminal Crane (MTC 15) arrived at Ladol in sections as a Meccano. LADOL and Mammoet personnel worked together and assembled the Crane at the quayside.”

“This was no simple task and required precision when each component was connected and assembled. However, in no time at all and with the assistance of cranes, forklifts and a team of dedicated personnel the MTC 15 was assembled.”

“LADOL’s business is driven by the United Nations Sustainable Development Goals and this partnership with Mammoet is in line with this dedication – bringing more partnerships, jobs, education and prosperity to Nigeria by taking Nigeria one step closer to being the Industrial Hub for Africa.“

Commenting on the partnership, Michel Bunnik, Commercial Director of Mammoet Middle East and Africa said with the “Combination of Mammoet’s MTC crane and LADOL’s excellent infrastructure, such as 200m quay with 8.5m draft, warehousing, fabrication and assembly yards, the base can now be considered as a fully independent heavy lifting terminal. It can support the largest industrial projects in the world, solving cargo handling and logistics challenges of project owners, EPCs and freight forwarders, as they can get heavier things in and out of Lagos more efficiently than they could before.”

“The MTC-15 crane is ideal for loading and offloading heavy breakbulk cargo, without having to reinforce the quay, making it possible to bypass other Apapa quays and transport the cargo and materials directly to sites; saving a considerable amount of time and resources.” Michel added.

The Zone was developed out of a disused swamp and has been operational since 2006. Every year since then the infrastructure and facilities have grown and expanded. The Zone now provides a 24/7 efficient, safe, and secure location from which local and international companies, in a range of sectors, can start operating immediately. In 2017 LADOL disrupted the local oil and gas market, halving the costs of local support, and creating thousands of local jobs. LADOL is now focused on attracting and servicing a range of non-oil and gas companies, in sectors ranging from technology to agriculture. The sectors identified will work together to create a circular economy within the Zone. West Africa is one of the largest under-served markets in the world with the fastest growing population. Industrial companies working in LADOL can service this market sustainably and profitably, while creating tens of thousands of jobs. As the local market grows there will be higher demand for locally produced products, a larger skilled workforce, and cheaper domestic operating costs.
LADOL is becoming a blueprint for the Sustainable Industrialisation of Africa, turning Africa’s demographic dividend into a global wealth creation.