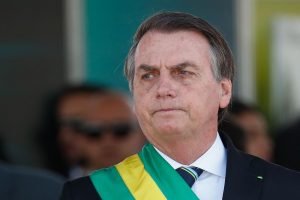 Sao Paulo — Stronger-than-expected support for President Jair Bolsonaro in the first round of Brazil’s presidential election was cheered by financial markets on Monday, as the race went to an Oct. 30 runoff.

Brazil’s real was up more than 3% against the dollar, while the Bovespa stock index rose 4.5%.

Bolsonaro’s leftist challenger, former President Luiz Inacio Lula da Silva, fell short of clinching victory in the first round of voting on Sunday. Lula finished ahead of Bolsonaro by 5 percentage points, but it was tighter than most opinion polls had indicated.

Bolsonaro’s allies also made a strong showing in the congressional vote, potentially limiting Lula’s room for dramatic policy changes if he does return to the presidency.

Some market participants anticipated that the result may push Lula to commit to more moderate economic policies, while energizing the campaign of Bolsonaro, who has promised reforms and privatizations welcomed by many investors.

“I think people will see reforms as more probable,” said Ricardo Lacerda, founder and CEO of investment bank BR Advisory Partners, adding that he thought Bolsonaro might take the lead.

Chances of a potential Bolsonaro reelection boosted shares in state-controlled companies in expectation they could be privatized should he secure a second term.

Shares in Banco do Brasil SA rose 7.8% and preferred shares in oil company Petroleo Brasileiro SA, known as Petrobras, were up 7.8%.

Results in southeastern states such as Sao Paulo and Minas Gerais also affected some shares with exposure in those regions.

Shares in power company Cemig and sanitation firm Copasa  , meanwhile, were up 8.5% and 11% respectively after the reelection of pro-market governor Romeu Zema in the state of Minas Gerais.

The only losers on the Bovespa index were education companies, which could benefit from an outright Lula win as the leftist candidate has been saying he would bolster public student loans if elected.

YDUQS and Cogna dropped about 1.5% each.

Analysts at Guide Investimentos noted that even though sectors such as education, capital goods and retail were to benefit from a Lula government, the impact would be limited due to the new right-leaning Congress composition.

Gustavo Cruz, strategist for RB Investimentos, said the hard-fought race showed that neither candidate was getting a mandate for radical policies. “Whoever is the winner, he will not have a blank check from the electorate,” he said.