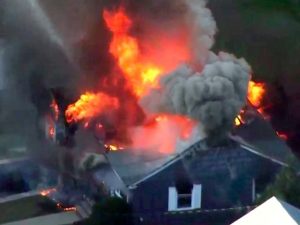 17 September 2018, News Wires — Residents of three Massachusetts communities were allowed to return to their homes on Sunday for the first time since a series of gas explosions killed one man and set dozens of buildings on fire.

Natural gas leaks, believed to have been caused by over-pressurized lines, on Thursday triggered a series of explosions and fires in Andover, North Andover and Lawrence, communities northwest of Boston. Local officials ordered residents of some 8,000 homes and businesses to evacuate and shut off electricity to prevent further fires.

It was the largest natural gas pipeline accident, in terms of the number of buildings involved, in the United States since 2010, when an interstate line operated by Pacific Gas and Electric Co ruptured in San Bruno, California, destroying 38 buildings, damaging 70 more, and killing eight people.

Columbia Gas of Massachusetts, which provides service in the affected communities, declined to comment on Sunday on what caused the leaks, saying federal investigators would decide. The company had said before the releases that it would be upgrading gas lines in neighborhoods across the state, including the affected suburbs.

Columbia Gas’ parent, NiSource Inc, has set up a phone center and an office in Lawrence to accept residents’ claims for property damage and costs related to the fires and evacuation, NiSource spokesman Ken Stammen said in an email.

“There is no sign that anyone did anything intentional,” Jennifer Mieth, a spokeswoman for the state Fire Marshal said on Friday. She said the FBI would stay involved until the NTSB, which is leading the probe, determined what caused the leaks.

Utility crews worked through the weekend to complete checks and shut gas meters on homes and buildings in the affected areas, Eversource Energy, the utility overseeing the review, said on Sunday. State officials asked Eversource to oversee the initial response to the gas release.

Electric power is being restored and will be available to all customers by noon on Sunday, Eversource said on its website.