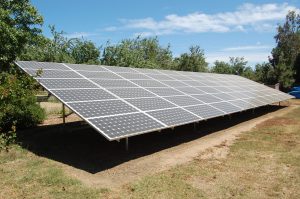 *Mini-grids for remote and rural communities.

29 August 2018, Dakar — Nigeria is on the verge of a boom in mini power grids that could stimulate rural economies and bring jobs to frustrated youth thinking of leaving, researchers said on Wednesday.

Less than half of all Nigerians and only about a third of those living in rural areas have access to electricity, according to the United States Agency for International Development.

Minigrids – stand-alone power systems that often use solar power and can generate electricity for 5,000 to 10,000 people – are starting to take off in Nigeria and could change that, the Rocky Mountain Institute said in a report this week.

“These minigrids could drive a significant economic change in rural Nigeria,” said Sachi Graber, an associate with the U.S.-based non-profit and co-author of the report.

Minigrids give rural businesses a cheaper, more reliable alternative to the diesel generators people use now to power everything from sawmills to barbershops, said James Sherwood, co-author of the report.

Change is already evident in parts of Nigeria where they have been installed, he said.

“As soon as the minigrid shows up, you see people moving in from other areas and the economy grows,” he told the Thomson Reuters Foundation.

Poverty has driven thousands of Nigerians to try to migrate to Europe in recent years, and many have died on the journey through the Sahara desert and across the Mediterranean.

The fact that electricity access is a big driver of migration within countries means it could influence international migration too, said Leo Roberts, a specialist in renewable energy at the Overseas Development Institute.

“People tend to move from places with lower levels of access to electricity, which tend to be rural areas, to urban areas where there is a higher level of access,” he said.

“So one of the things you see (with minigrids) is that people are more likely to stay where they are.”

After Tanzania, Nigeria is the African country that is farthest along in developing minigrids because the government has taken an active interest, Roberts said.

But challenges remain, primarily the lack of financing and nervousness of investors to put money in new markets, he added.