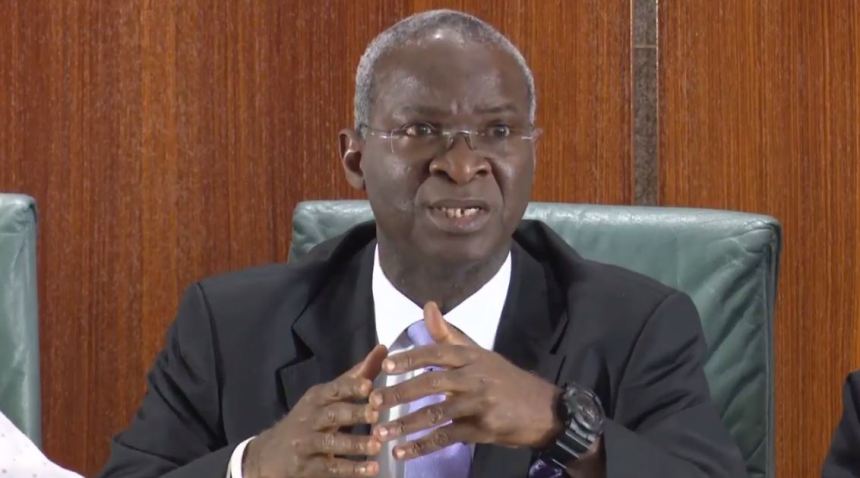 Oscarline Onwuemenyi
19 October 2017, Sweetcrude, Abuja – The Federal government has disclosed that the bulk of the over N1.2 trillion capital allocation from the 2017 budget was utilised in the mining sector.

The Minister of Power, Works and Housing, Mr. Babatunde Fashola, who made this disclosure at the 2nd Nigeria Mining Week in Abuja, said the bulk of the materials required for the development of infrastructure, namely power plants, roads, bridges, houses, others come from operations of the mining industry.

Fashola noted that most of the allocations for other ministries including power, works and housing as well as transportation sectors in the 2017 budget indirectly ended up in the mining sector.

He said the government and other players in the construction industry would not be able to build roads without granite, sand, laterite, cement, limestone and bitumen that came from the sector.

According to him, the government decided to raise its budget for capital projects from almost 15 per cent of its total earnings in 2016 to 30 per cent in 2017 as part of a commitment to bridging the infrastructure gap in the country.

Mr. Fashola stressed that the National Bureau of Statistics (NBS) reported that the solid minerals sector, which had nine consecutive quarters of negative growths since 2014, also ended on a positive note in the second quarter 2017.

The NBS said limestone, granite and sand, used in the construction industry, for the first time constituted 90 per cent of the mining activities that took place in the mining industry in 2016, with the other minerals accounting for only 10 per cent.

“There was growth in the basic metal, iron and steel industry during this period. The construction industry, which has been in negative growth, started picking up as a result of the implementation of the budget.

“We have come out of recession. For those still saying what coming out of recession means, I think they should visit the mining sites and see what is happening there,” Fashola said.

He added that the government was preparing to collect data with the disbursement of part of the N100 billion Sukuk funds issued recently, to observe the impact of the money in the mining sector and see what would happen if more was spent on capital projects in future.

Speaking in his welcome address, the Minister of Mines and Steel Development, Dr. Kayode Fayemi, said the Nigeria Mining Week sought to help prioritise government agenda to reposition the mining sector as one of the frontiers of economic diversification agenda.

He said since the launch of the roadmap for the development of the mining sector last year, some of the challenges have been resolved and the sector de-risked for sustainable growth.

On access to finance, he said the Bank of Industry, BOI, and the Nigerian Solid Minerals Development Fund launched a N5 billion fund to provide single digit interest loans to mining projects in Nigeria.

Besides, he said, about N30 billion has been approved from the Natural Resources Intervention Fund for the promotion of the exploration of new minerals to strengthen the regulatory capacity of the ministry.

In addition, the government also secured a $150 million World Bank loan for the Mindiver Project to fund strategic interventions in the sector.

Another $600 million investment fund, the minister said, was being arranged by some entities, including the Nigerian Sovereign Investment Authority (NSIA) and the Nigerian Stock Exchange and others.

“Already, the mining sector has begun to record very impressive results. We achieved a 300 per cent increase in revenue (royalties and fees) between 2015 and 2016, and as at July of this year, the sector had already surpassed the entire revenue of N2 billion generated for the whole of 2016,” he said.

The Nigeria Mining Week was organised by the Miners Association of Nigeria, in partnership with IPAD Nigeria, PricewaterhouseCoopers and Spintelligent.

The Attah of Ebiraland in Okene, Kogi State, Ibrahim Atta, decried the non-reactivation of the Nigerian Iron Ore Mining Company (NIOMCO) and the Ajaokuta Steel Complex for over 30 years, describing it as a big shame on government.

“I am happy the ‎government has moved to right the wrong in the sector. The two companies must be reactivated and operated to the benefit of the people and the country’s economy. That has to be done. If it is not done, that will be a real big shame to the government.