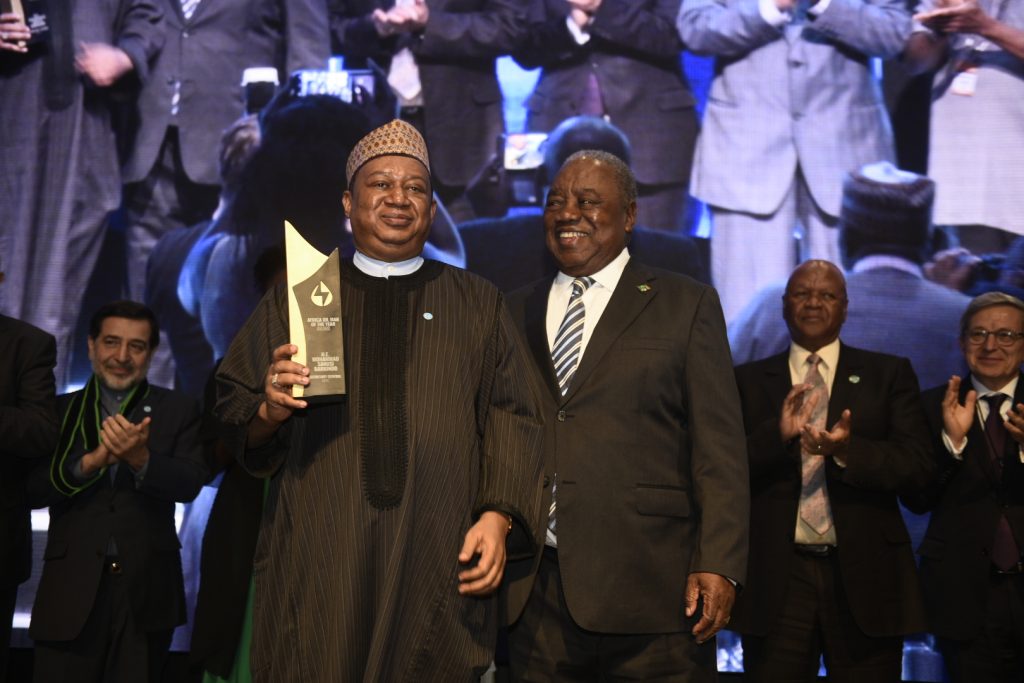 *Calls on all African countries to join OPEC

11 September 2018, Sweetcrude, Lagos — Secretary-General of the Organization of the Petroleum Exporting Countries, OPEC, Mohammad Barkindo, has won an award for ‘Africa Oil man of The Year’.

The award presented to the OPEC’s helmsman at the Africa Oil and Power Energy Coalitions Gala Dinner, held in Cape Town, South Africa, was for his contribution, teamwork, and success in the Declaration of Cooperation, DoC.

While accepting the award, Barkindo thanked OPEC and partners who have contributed to the realization of the DoC.

“We interpret this Award as recognition of the teamwork, dedication, and selflessness of a remarkable group of countries: namely, the “Declaration of Cooperation” strategic partners. Working with the statesmen, leaders, and representatives of the OPEC Member Countries and the non-OPEC producing countries has been the honour of a lifetime. Thankfully, our tireless efforts have borne fruit and our industry is in a much healthier place than it was two years ago”.

According to him, perceptions of OPEC have undergone a profound transformation in the last two years, adding that the DoC had caused “a great rejuvenation of our Organization and Industry”.

To Barkindo, it is no coincidence that the DoC had occurred at the same time as an intensification of OPEC’s engagement with Africa.

“African membership of both OPEC and the “Declaration of Cooperation” strategic partnership has increased, and other African partners engage with us across a broad range of fronts, including through their attendance at the OPEC/Non-OPEC Ministerial Meetings”.

“I think one of the most important reasons why the “Declaration of Cooperation” has been successful is because at its heart; it has a fair, timely and transparent goal which can be articulated in four simple words: sustainable oil market stability. Our means for attaining that goal can be summarized in a similarly straightforward manner: voluntary cooperation among nations”.

This approach, he said resonates with the theme of the conference, “energy coalitions”, encouraging all producing countries from across this continent to consider joining OPEC in its efforts to work in the interests of producers and consumers, as well as the global economy.

“When we began the “Declaration of Cooperation” journey in 2016, many doubted that we could achieve our goals. The health of the industry was such that some thought oil market stability would remain elusive forever”.

“However, throughout our endeavors, we were inspired by the eloquent words of one of this magnificent nation’s greatest leaders and our personal hero, Nelson Mandela: Madiba constantly reminded us during these dark days of the downturn’, he said.

“We accept this Award on behalf of all of those participating countries, both OPEC and non-OPEC, who have done so much to transform the fortunes of our industry. And I dedicate it to all the hard working people representing those countries, in particular, my colleagues at the OPEC Secretariat, for the outstanding work they have performed in the last two years. It would not have been possible without their hard work, commitment to duty and strive for excellence at all times”.

Looking to the future, he said OPEC will never cease to advocate for cooperation, collaboration and fraternity among nations as the best solutions to overcoming challenges.