on: September 26, 2019In: Community Development 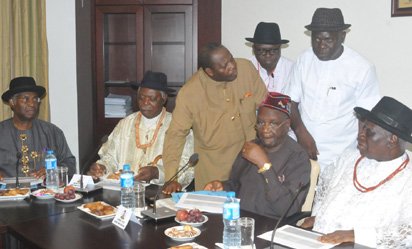 PANDEF spoke exclusively to our correspondent in Port Harcourt on the build-up to this Saturday’s planned visit of the Minister of State for Petroleum Resources, Chief Timipre Sylva and the Group Managing Director of NNPC, Mr Melee Kyari, to OML25 host communities in Rivers State.

National Publicity Secretary of PANDEF, Chief Anabs Sara-Igbe, said the call was in line with the Federal Government’s directive in 2016, that oil firms should relocate to the host communities.

Sara-Igbe disclosed that the group will take it up with the Minister of State for Petroleum and the GMD of NNPC, to ensure the directive comes into fruition, in line with the 16-points agenda PANDEF had presented to the President Muhammadu Buhari in 2016.

He said that the Federal Government should lead by example, by relocating her investment and regulatory agencies in the oil and gas sector to the region, in order to pave the way for every oil firms to follow suit.

According to him, “We agreed that NAPIMS should move to the Niger Delta but they are in Lagos, what are they doing in Lagos? Maybe because most of the multinationals are in Lagos but we will prevail on the GMD of NNPC

“As PANDEF, we will emphasis, since Belemaoil has set the pace others should follow and NAPIMS, Federal Government institution must come over to the Niger Delta and coordinate all the oil activities in the region.

“So we are insisting as a people that these things should take place and as a demand, we pray the government will listen to it.”

PANDEF also said multinational oil firms should divest from onshore to offshore, in order to pave the way for indigenous participation in the sector, especially Niger Deltans, to take over onshore operations, in line with the local content law.

Sara-Igbe also charged other oil firms to emulate the model operated by Belemaoil Producing Limited, where the company is not only developing her host communities, but also relocating its corporate headoffice to the host community.

“Relocation of headoffices to the region was part of PANDEF’s 16 points agenda to President Muhammadu Buhari. Then Acting President also came around the Niger Delta and made a proclamation that all oil companies should move to their areas of operations, but they (oil firms) deliberately disobeyed the Vice President, and instead played politics with it.

“But when our son Bemelaoil came in, he operated in the Niger Delta despite the pressure to move its headquarters to Lagos but he resisted it and stayed in Port Harcourt. Today, Belemaoil is moving directly to its operational community. On September 28, the Minister and the GMD NNPC will lay a foundation stone of the Belemaoil headquarters in Kula.

“So, we are appealing to the other oil companies that they must all move to our region. But again, they should also leave the onshore for us and move offshore.

“They (multinationals) have the capacity, so they should not disturb the onshore. The onshore should be left for the Niger Delta indigenes who have capacities to manage while they move offshore, that way we will not have reason to disturb them again.”