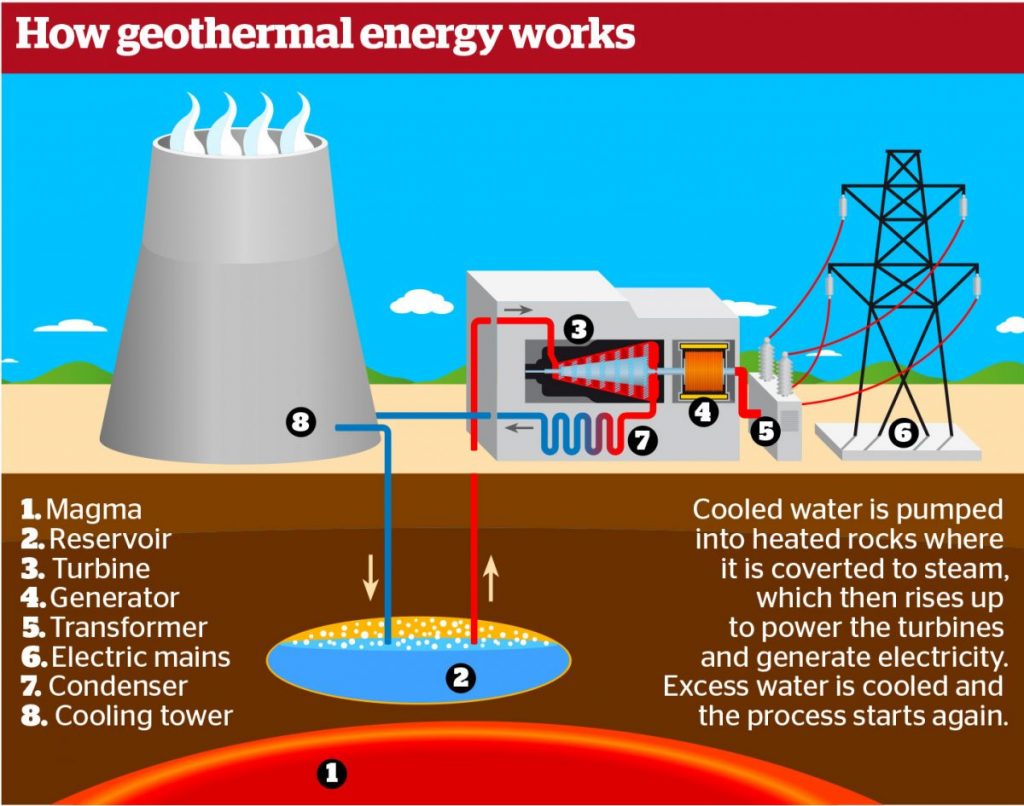 News Wire — Commonly associated with water via hot springs, geysers, or plumes of steam, geothermal energy relies on underground heat. A Canada-based firm has developed geothermal technology that removes water from the equation, potentially expanding where the renewable resource can be tapped.

“Geothermal, derived from its Greek roots, means ‘earth’ and ‘hot’ and quite literally means that we bring heat up from the ground,” Chris Cheng, senior development engineer with Eavor, told Rigzone. “This heat can then be used directly or converted to electricity with a power generation unit.”

“Since there is heat under the ground everywhere, Eavor technology is applicable in many more places than traditional geothermal, places where that hot water or steam resource may not exist,” he said.

Cheng explained that his company’s technology generates electricity by bringing heat up to the earth’s surface with a working fluid inside the “Eavor-Loop” system, exchanging heat with the working fluid – often one of two natural gas liquids – used by the power-generating unit.

“For an Organic Rankine Cycle application, this working fluid is usually butane or pentane, shown in the red loop and is chosen for its lower-than-water boiling temperature,” Cheng said, referencing the diagram below that illustrates Eavor’s closed-loop technology. “The working fluid is allowed to vaporize and expand in the power turbine which turns this into rotational energy, making electricity. The working fluid is cooled and condensed back to a liquid and is ready to collect heat from the Eavor-Loop once again.”

“While the power generation unit is not unique to Eavor, Eavor’s novelty in its closed-loop design reduces exploration risk – no need for hot aquifers – and allows for more predictability and operational control, including dispatchability,” Cheng said.

The geothermal technology’s novelty evidently appeals to two major oil and gas players, which have steered investment dollars to Eavor. Find out which companies are supporting the technology developer in the following excerpts from Rigzone’s conversation with Cheng.

Rigzone: Where in North America is there sufficient geothermal potential to sustainably diversify the energy mix?

Chris Cheng: The average geothermal gradient around the world is about 30 degrees Celsius (86 degrees Fahrenheit) per kilometer (0.6 miles), which means that, on average, the temperature increases by 30 degrees for every kilometer you drill into the earth.

It all comes down to price, and Eavor believes there is geothermal potential in most places in the world, including all of North America, for both heat and electricity. For now, while the technology is new and costs are high, Eavor is targeting locales where the price for heat and electricity is also high, such as in Germany, the Netherlands, or Japan. These countries have what we call feed-in tariffs in place to help support the transition to renewables.

Eavor is working hard to reduce the cost of its technology so that it can be economic anywhere, comparable to the prices we see now for wind and solar but with the added benefit of dispatchability and small footprint.

Rigzone: What makes geothermal stand out as a renewable resource?

Cheng: Compared to wind and solar, geothermal has a relatively small surface footprint which is important in jurisdictions where surface space may be at a premium.

Secondly, as previously mentioned, Eavor’s closed-loop design allows for improved operational control, making the Eavor-Loop both load following and dispatchable. The heat in the ground is always present, while the wind and the sun may not always be there.

Rigzone: Where do you see geothermal contributing to the energy transition, particularly in North America?

Cheng: Eavor sees itself fitting into the energy mix alongside other renewables. It can fill in the gaps where wind, solar and traditional geothermal are less effective, such as during the night, when the weather is unfavorable, or where the geology doesn’t support traditional geothermal.

Rigzone: What are the biggest misconceptions you hear about geothermal energy, perhaps from the oil and gas community? How do you overcome them?

Cheng: We get a lot of questions about induced seismicity or fracing, which can be a non-starter in some places. With Eavor’s closed-loop system, there is no fracing and a very, very low probability of induced seismicity, so it’s important that we educate potential clients and partners about what separates our technology from the incumbents.

While we are adopting technology from oil and gas, Eavor’s technology eliminates some of the perceived negative aspects that may be associated with enhanced geothermal systems or hydrocarbon extraction, such as fracing.

In the grand scheme of things, the misconceptions are not that major – something that a few technical meetings can overcome – and the overall reception has been positive. Our latest round of investment back in February of 2021, which included bp (NYSE: BP) and Chevron (NYSE: CVX), are a good indicator that we have been embraced by at least some major players in the oil and gas industry as a viable solution.

Rigzone: Where do you see geothermal market opportunities for oil and gas industry players such as operating companies, drilling companies, service and equipment providers, etc.?

Cheng: One of the reasons Eavor is based in Calgary is because of the vast amount of geoscience and engineering expertise that exists due to the oil and gas roots of this city. There is a lot of opportunity for technical staff, service and equipment providers to pivot into geothermal due to the amount of overlap between the two industries.

For example, as a development engineer, the work that I do is remarkably similar to oil and gas. We have to select a good place to drill an Eavor-Loop, which begins with good geological and geophysical work, then we have to design the well and spend capital to drill the well and construct the facility, and finally sell a commodity for a forecasted price over many years.

Sound familiar? For geothermal, instead of oil and gas the commodity is heat and power, but the development process and the financial modelling is very similar!