26 November 2015, Lagos –  The Nigerian Civil Aviation Authority has suspended five oil marketing companies from supplying aviation fuel, also called Jet A1, to local and foreign airlines operating in the country due to lack of depot facilities. 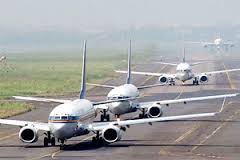 Air planes on the runway.

The suspension of the marketers was contained in a circular with reference number: NCAA/DAW/AD 1104/AOL052/VOL1, and dated November 9, 2015, a copy of which was obtained by our correspondent on Wednesday.

The circular, which was signed by the Director of Airworthiness Standards, NCAA, Mr. Benedict Adeyileka, on behalf of the director-general of the agency, was addressed to airline and aircraft operators in the country.

Titled, ‘Notice of suspension of some companies from providing aviation fuel supply services to airlines at airports in Nigeria’, the circular explained that the reason for the suspension was that the affected companies did not have depots and, therefore, should not be engaged in the distribution of aviation fuel at the airports.

The letter read in part, “This is to notify you that the authority is in receipt of a letter from the Department of Petroleum Resources that the under-listed companies have no depot facilities and should not be engaged in aviation fuel distribution at the airports.”

The DPR was said to have asserted that the integrity and competences of the companies could not be ascertained and advised the NCAA that the firms should be disallowed from further supply of aviation fuel to airlines in Nigeria.

The circular also stated that the NCAA had directed the Federal Airports Authority of Nigeria to deny the companies access to airports in the country, including their aviation fuelling vehicles and personnel till further notice.

“You are hereby required to suspend the fuelling of your aircraft by any of these companies until further notice,” the NCAA directed the airlines and urged them to ensure strict compliance with the directive.

Aviation experts said the absence of storage facilities would make it difficult for inspectors from the NCAA and relevant aviation officials to examine the quality of fuel being supplied by the oil marketers.

The suspension of the oil marketers came barely four months after the European Aviation Safety Agency wrote to the NCAA that contaminated aviation fuel bought by foreign airlines flying into Nigeria was found to have damaged their aircraft engines.

The NCAA subsequently put all airline operators on the alert, pointing out that an Airbus A330 plane, which refuelled in Lagos recently, was discovered to have got contaminated fuel.

The regulatory agency, in a statement subsequently warning airline operators about the development, noted that the European aviation industry safety regulator had issued an alert following the discovery by Rolls Royce, the manufacturers of the Trent 700 engines that powered the Airbus A330.