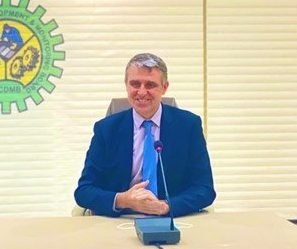 Lagos — The Executive Secretary, Nigerian Content Development and Monitoring Board (NCDMB), Engr. Simbi Kesiye Wabote has charged International Operating Oil and Gas Companies to emulate Total Exploration and Production Company (Total E&P) in sponsoring new projects and stop being deterred by the delayed passage of the Petroleum Industry Bill (PIB).
He gave the charge recently when he received the Managing Director of Total E&P, Mr. Mike Sangster at the Nigerian Content Tower, headquarters of the NCDMB in Yenagoa, Bayelsa State.
He commended the MD for his emergence as the chairman of the Oil Producers Trade Section (OPTS)- the umbrella body of major oil producers, adding that his appointment was deserving because Total E&P was the only international operating company that had taken Final Investment Decisions and sanctioned major oil and gas projects in recent times in Nigeria despite the delayed PIB.
While expressing confidence in the determination of the 9th National Assembly to pass the PIB after it had been delayed for over 15 years, Wabote encouraged other IOCs to forge ahead with their new projects. He hinted that new projects were needed to grow Local Content and create work opportunities for local fabrication and manufacturing yards, many of which have been idle since the conclusion of the Total’s Egina deep water project in 2018.
He also charged Total E&P to lend its full support to the ongoing NLNG Train 7 project, adding that the project held great prospects for the local oil and gas industry and host communities.
The Executive Secretary remarked that the Egina Project remains “the benchmark of upstream project delivery considering its record-breaking performance in local content practice in the oil and gas industry. The project served as a veritable tool to raise the bar in the development of our in-country capacities and capabilities.”
He added that “the Board is also happy with Total E&P on the implementation of the ‘Adopt a Faculty and the various actions it had taken on the programme.
Wabote also solicited the support of the chairman of the Oil Producers Trade Section towards the conclusion of the categorization of in-country oil and gas capacities and capabilities, covering engineering, fabrication yards, testing facilities and training facilities.
Another area of collaboration with OPTS is in the study for local gaskets manufacturing: study, to determine what it will take to produce all the gasket requirements in-country.
He also asked OPTS companies to prove feedstock for newly established modular refineries to increase value addition, local refining, demotivate illegal refiners and stealing of crude.
The Executive Secretary also noted that the Board has made significant progress with the development of Nigerian Oil and Gas Parks Scheme in Bayelsa and Cross River states and requested the operating companies to encourage their key suppliers to set up manufacturing shops in the NOGAPS sites as they become operational by end-2022.
The Total MD had remarked earlier that the company had operated in Nigeria for 60 years and is the only IOC that operates in the upstream, midstream and downstream sectors of the Nigerian oil and gas industry.
He indicated that the company developed the last three Floating Production Storage and Offloading (FPSO) platforms in Nigeria and Egina created new records, one of which is recording 40 million manhours in-country.
Sangster also reported that the company had made significant progress with the development of the Ikike Oil Field and would record first oil before the end of 2021. He admitted that “it had been difficult developing the project, particularly with the pandemic, but we are making progress and we appreciate the support from the NCDMB.”
Commenting on the PIB, which underwent public hearing in the National Assembly in January, the OPTS lead advised federal legislators and policy makers to ensure that the fiscal provisions in the law are fair to key stakeholders, so as to stimulate new investments in the industry.