on: October 10, 2020In: Community Development, featured 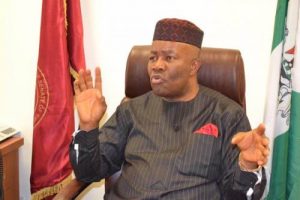 Port Harcourt — The Minister of Niger Delta Affairs, Sen. Godswill Akpabio, has regretted that the Niger Delta Development Commission, NDDC, has not lived up to expectations since it was established 19 years ago.

To this end, the Minister says the ministry is committed to harmonising the Niger Delta Regional Development Master Plan with the Niger Delta Action Plan to produce one regional road map for development in the oil-rich region.

Akpabio, who spoke while inspecting the NDDC permanent headquarters at the Eastern by-pass, Port Harcourt, harped on the need for collaboration and synergy in the effort to develop the region.

“Whether we like it or not, this child (NDDC) has not grown well in 19 years. It could have done better. Perhaps, we lost track of the developmental plan of the Niger Delta region,” the minister said

He, however, commended the NDDC Acting Managing Director, Prof. Kemebradikumo Pondei, and members of the Interim Management Council, IMC, for doing a good job in delivering the new office complex, which he described as a good story for the NDDC.

“The most thrilling thing for me is that change has come to the NDDC. I must commend the management and staff of the NDDC for making this possible. Despite the criticisms and distractions, some positive change has taken place in the commission and I like to see progress because I am a development-oriented politician.

“The feat could not have been achieved without the cooperation of members of the IMC and the Ministry of the Niger Delta Affairs.

“The completion of the new NDDC headquarters is a positive story for Nigeria, especially when you consider that the project has taken over 24 years to get to this point.

“It is to the glory of President Buhari that we are sitting in the new headquarters today. This is a legacy project which the IMC will be remembered for,” he added.

The Minister said that with the inauguration of the NDDC Advisory Council by President Muhammadu Buhari, the Commission would work closely with the governors so that there would be synergy and the problem of duplication of projects would be addressed.

“I want a positive image for the NDDC. Therefore, we must collaborate with the National Assembly to change the situation. If there is need to rejig the law, we will encourage the lawmakers to do that, particularly in the area of budgeting.

“We must budget for more regional projects that will impact lives of the people. We must budget to bring industrial development, as well as bring about capacity building in the region,” Akpabio stressed.

Earlier, the NDDC Director of Project Monitoring and Supervision, Engr. Tonye George, said he felt fulfilled that the project, which started in 1993 during the days of the Oil Minerals Producing Areas Development Commission, OMPADEC, was virtually completed.

George said that the IMC was able to push the project to the level where the contractor was now putting finishing touches because of the active support of the Minister of Niger Delta Affairs.