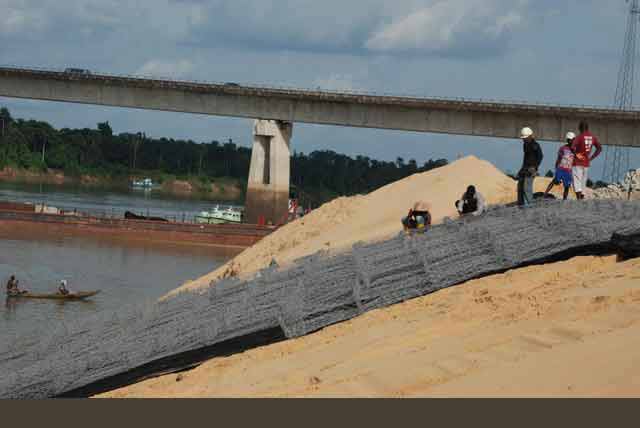 *Shoreline protection in the Niger Delta.

Port Harcourt — The Niger Delta Development Commission, NDDC, says it will soon start work on the reclamation and shore protection of eroded parts of Odi in Kolokuma-Opokuma Local Government Area of Bayelsa State.

NDDC Acting Managing Director, Prof Nelson Brambaifa, who disclosed this at the palace of the traditional ruler of Odi Kingdom, King Shine Apre, said the Commission would not relent in its drive to provide basic infrastructure in communities across the Niger Delta region.

Brambaifa assured that no effort would be spared in protecting coastal communities in the region.

“In the next couple of weeks, we will start to work onshore protection. I am aware of the erosion problem in Odi and we will certainly address it. We will also take care of the internal roads in the town,” the NDDC boss said.

Responding, King Apre commended the NDDC Acting Managing Director for showing concern to the plight of the people of his kingdom and called on NDDC to support Odi in promoting the course of the Ijaw nation.

He said that Odi Kingdom was holding its annual Ogori Ba Uge Festival which, among other things, was one of the avenues for taking the story of Odi beyond the shores of Nigeria. “We want to show the world our culture. We expect the NDDC boss to help us to share the Ijaw story,” he said.

While taking the NDDC management to inspect the site of the landslide which destroyed many houses in April 2019, the Vice President of Odi Youth Council, Mr. Teibowei Brown, said he was relieved to learn that NDDC was intervening to save Odi from the ravages of erosion and landslide.

Brown said that the erosion was one of the many environmental challenges confronting the communities especially those along the river banks, noting that the last incident at Odi, destroyed many houses located along the bank of River Nun which passes through the community.