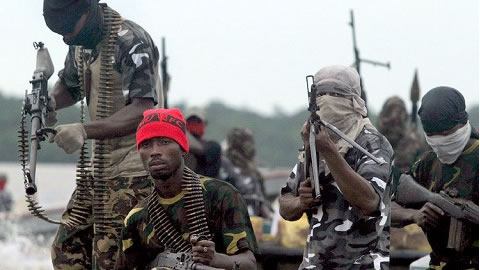 The groups, under the Forum of All Ex-militant Leaders, met on Saturday in a location in the creeks and later issued a statement.

The groups, led by ‘General’ Gift Tare of the Iduwini Volunteer Force, said the ex-militants would be targetting oil platforms that were important to the “survival of the Nigerian economy,” if their demands were not met in two weeks.

The leaders of the groups, who described themselves as ‘Generals,’ accused the Federal Government of a failure to pay their monthly allowance and condemned the “deliberate refusal of the Mr. Kingsley Kuku-led Presidential Amnesty Committee to recognise those who had submitted their arms under the amnesty programme. Kuku is the Presidential Adviser on Amnesty Programme.”

They urged the government to pay the regular monthly allowances of militants who had dropped their arms.

“Except these modest requests are granted within the next 14 days, the Presidential Amnesty Committee should be ready for more face-off and violent confrontations,” the statement issued sat the meeting reads.

Kuku had dismissed the protesters as disgruntled youths who were bent on derailing the amnesty programme. He had also insisted that the youths from the Niger Delta, who were currently agitating, did not submit their arms before the closure of the amnesty window.

The statement says the meeting, which lasted over six hours, “critically reviewed the amnesty programme, the nonchalant attitude of the implementers, the double standard applied to various ex-militants from various ethnic nationalities and preference to fighters of some selected ‘Generals’.”

They said they had resolved to employ the “instrument of violence” since the authorities had ignored their agitation.

They added: “Since the Mr. Kingsley Kuku-led Presidential Amnesty Committee has decided to turn this well-thought out peace initiative of our departed President and Apostle of peace, the late Alhaji Musa Umaru Yar ‘adua into his private and family business, everything, including violent confrontation should be adopted to correct this deliberate act of one of our own, who has today turned himself into an oppressor of sorts.

“That the Federal Government should urgently probe the Presidential Amnesty Committee as we have facts and figures to show that several persons who are not even recognised ex-militants are not only benefitting from the programme, but are today deciding the fate and destiny of known ex-fighters and patriots of the Niger Delta emancipation.”

The ex-militants regretted the recent attacks on some vehicles owned by newspaper houses, noting that the drivers of the vehicles simply “refused to obey instructions.”

The group further demanded that the Federal Government should immediately convene a stakeholders’ meeting where all aggrieved warlords would have an opportunity to let out their frustrations with the amnesty programme.

The Yar’Adua administration introduced an amnesty programme under which militants in the Niger Delta submitted their arms in exchange for state pardon, reintegration and retraining.