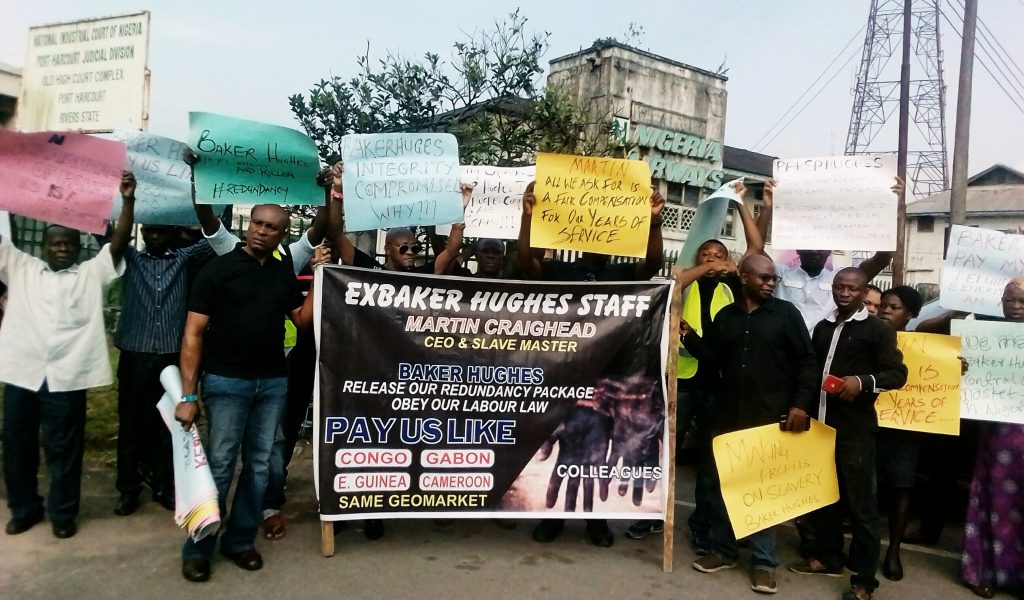 *300 ex-workers of Baker Hughes at one of their protest in front of NICN, Port Harcourt.

13 November 2018, Sweetcrude, Port Harcourt — The National Industrial Court of Nigeria, NICN, sitting in Port Harcourt, has again resumed sitting on the N19billion compensation claims brought before it by ex-workers of Baker Hughes Nigeria Limited, against the company.

About 14 widows who lost their husbands while in active service under the employment of Baker Hughes without commensurate compensation package, had also sue the company demanding the sum of N7billion as compensation for their deceased husband, in line with the Workman’s Compensation Act of 2016.

Counsel to the claimants, Barr. George Ogara had filed an injunction asking the court to prevail on the American oil firm to pay a total of N12billion as redundancy benefits to the disengaged workers, and that the money should be paid into the court’s bank account.

But the case was stalled in February 2018, following the death of the presiding judge, Justice Ibrahim Awwal, few days to when he was to rule on the matter.

In the meantime, the case which has over 200 suits has now been reassigned to four separate judges in the National Industrial Court of Nigeria, Port Harcourt, and court sessions have begun.

Speaking exclusively to our correspondent after the court session, Counsel to the aggrieved ex-workers of Baker Hughes, Barr. George Ogara expressed confidence that his clients will get justice at the end.

Ogara, who described as unconscionable and immoral, also accused Baker Hughes of convincing some of the aggrieved ex-workers to withdraw their case in the court, in exchange for a new job offer in the company.

He also explained that the situation in the court right now is to categorise the cases according to their different peculiarities, so as to enable the court to handle them in batches.

“I am expecting that hearing on this matter will go on smoothly and the judgment will be in favour of the ex-workers. It has not been easy with them (ex-workers). I know that life is not easy and things are difficult at the moment.

“I also know that the wheels of justice grind slowly, but I will appeal to them to be patient with the judiciary, the last hope of the common man. We will follow the procedures to the end at the end of the day, their rights will be restored to them, that I am very optimistic. ”

Also speaking, Lead Counsel to the defendants in the case, Barr. Y.A. Kadiri, said the court is starting afresh and would decide on how to proceed with each of the various cases.

Kadiri also expressed confidence and optimism of getting justice for his clients, according to the principles of justice and the law.

“This is our first appearance before the court to enable us and the court to decide on how to proceed with the various cases.

“They (courts) are starting afresh, so they are just calling the cases to clear the coast on how to proceed on each of the cases, so that is where we are.

“I am a legal practitioner and I have a duty to uphold the principle of justice. I have a duty to defend my clients in all ramifications in accordance with the law, and I have the duty to trust the court that if I do my work as a counsel, the court will on its own part administer justice, according to the law.”