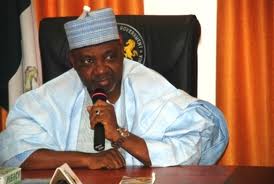 23 August 2012, Sweetcrude, ABUJA – NIGERIA’s Vice President Namadi Sambo says the government was determined to address the problem of unstable power supply in the country to give a rapid boost to industrialisation and generate employment.

He spoke when the Director-General of United Nations Industrial Development Organisation, UNIDO, Dr. Kandeh Yumkella, paid him a courtesy visit.

While briefing Yumkella on efforts made by the government to realise its transformation agenda, Sambo said to address power-related issues, a holistic approach had been employed, thereby developing the required synergy between Power and Water Resources Ministries.

He said part of the strategies employed included the use of Public Private Partnership, PPP, to develop small and medium hydro-power projects.

According to him, studies had been completed for 10 hydro-power plants and 17 more of such studies, adding that transaction advisers for the project were being appointed.

He said Nigeria has over 200 existing dams and that the combination of water, power and irrigation will boost both small and big businesses.

Sambo said wind-to-power pilot scheme was currently ongoing in Katsina State for 10mw, adding that government was trying all alternative sources of energy.