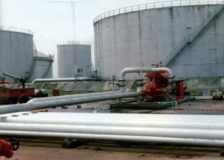 Section of a petroleum products depot.

03 August 2015, Lagos – The Department of Petroleum Resources, DPR, has shut 23 private petroleum products depots across the country for selling Premium Motor Spirit, PMS, to marketers above ex-depot price of N77.66 per litre, a statement said.

The statement, issued by DPR Director, Mr Mordecai Ladan, in Abuja on Sunday, said that the shutting of the facilities took effect on Friday.

It added that the depots were mainly in Lagos except for two in Warri, Delta, and three in Calabar.

“The clampdown on the private depots followed the report of a special investigation team set up by DPR to uncover some unwholesome practices by the private petroleum products depots following a tip-off,” the statement said.

It added that the depots would remain sealed until the some conditions were met by the owners, including payment of two million naira fine and an undertaking that PMS would not be sold to bulk buyers.

It also said that all subsequent sales would be at N77.66 per litre as approved by the Federal Government, adding that DPR would monitor the sale of the remaining and subsequent products.

The statement further said that DPR had directed all its offices to ensure that all filling stations sold PMS at government approved price of N87.00 per litre regardless of source of source depot.
*NAN