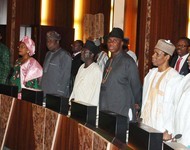 20 July 2013, Abuja – The National Economic Council, NEC, have approved the establishment of a Legal Task Force, LTF, to prosecute cases of oil theft across the country.

The News Agency of Nigeria, NAN, reports that the task force is to be headed by the Minister of Justice and Attorney General of the Federation, AGF, Mr Mohammed Adoke.

Gov. Emmanuel Uduaghan of Delta made this known when he briefed State House correspondents on the outcome of the monthly NEC meeting in Abuja.

The meeting was presided over by Vice President Namadi Sambo.

According to Uduaghan, the task force is to be made up of representatives from the NNPC, the Armed Forces, Civil Defence, Police, SSS and other related agencies

He said the task force had been mandated to commence the prosecution of proven cases of oil theft, using relevant laws, particularly the “miscellaneous offences Act which carries a sentence of 21 years without option of fine”.

He said already, about 500 suspects had been apprehended over alleged oil theft across the country.

“You know that because oil thieves are not being prosecuted, it seems to give them the courage to steal more. A lot of arrest had been made.

‘’We hear that there are over 500 persons who have been arrested, that are involved in oil theft.”

Uduaghan said that the task force would operate for only one year with effect from July, adding that the prosecution of established cases would continue and all convictions would be given wide publicity.

He said that members of the task force would be announced on Monday by the Attorney-General of the Federation.

The governor expressed the hope that the activities of the task force, when fully operational, would address the issue of the shortfall of 400, 000 barrels per day.

He said that the Governors of Bayelsa and Delta had been mandated to meet with the concerned oil majors and the Joint Task Forceto work out modalities for the effective repair of the Nembe and Trans Niger pipelines, which were currently shut down.

“The Council also mandated Gov. Godswill Akpabio of Akwa Ibom, Secretary to National Planning Commission, the Chief Executive of NEITI and a representative of the Inspector-General of Police to meet with the Attorney-General of the Federation towards strengthening the extant deterrence policy by ensuring more arrests and convictions of the oil thieves.”