Nigeria goes 'Down Under' to promote minerals 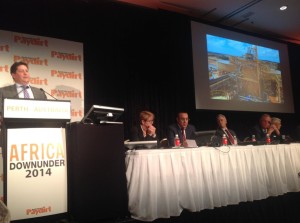 12 September 2014, Sweetcrude, Abuja – Once again, Nigeria participated in the Africa Down Under Conference in Perth, Australia. The Conference takes place yearly, and Nigeria, as is expected of a ‘mining’ nation, has participated every year for several years. It is such an important event in the mining calendar and officials in Ministry of Mines and Steel Development gleefully look forward to it every year.

The event website happily notes that this year’s conference attracted more than 2000 delegates, 160 exhibitors and a full three day programme of top-notch speakers, adding that apart from presenting companies, this year’s event was attended by several African Mines Ministers, business leaders and executives from the mining services industries: “The positive, changing face of the African continent is continuing to attract the lion’s share of global exploration dollars as prospectors zoom in on its untold mineral riches. Countries which were previously considered no-go areas have attracted a new wave of international investors, explorers and miners wanting to have another look. Striking examples of these are Angola, the Democratic Republic of Congo and Mozambique.”

It adds that over the ten years that Australia’s Paydirt has been hosting the Africa Down Under Conference, there has been a surge in the growth rates of nearly all African countries, largely driven by the unparalleled demand for commodities from China. “This ancient land mass of Africa is without question the world’s greatest treasure trove – and has yet to be comprehensively explored using modern techniques. While much of the continent has, in the past, attracted the major companies, a new era of joint ventures with juniors and grub-staking is taking place from Ghana in the north-west, to Kenya in the east and down south in the all-powerful triad of South Africa, Botswana and Namibia,” it further noted.

It does make sense, therefore, to begin to ask about how Nigeria’s attendance to this event over the years – at immense cost to the public, of course – may have profited the nation’s mining sector in particular and the entire national economy generally, after from depositing some hard currencies in the bank accounts of public officials and their acolytes.

Only a few months ago, while hosting the Canadian Deputy High Commissioner to Nigeria, Mr. Jean Gauthier, in preparation for Nigeria’s attendance in the Prospectors and Developers Association of Canada, PDAC, Convention holding in Toronto Canada, the Nigerian Minister of Mines and Steel Development, Arc. Musa Mohammed Sada wondered aloud what was wrong with the nation’s mining sector that it was yet to attract the biggest and most beautiful brides – namely major international players in the mining industry – into the country.

His wonderment stems from his position that the country, and the government, has done everything possible “to create the right regulatory environment for private investors to come and do business in Nigeria.”
Speaking about Nigeria’s attendance of confernces, Sada noted that, “We have been going and coming back for many years – many Ministers before me have attended – and when we look around we don’t see anybody.”

He said, “This time we want to go and meet with the right people, so that when we come back we shall expect a trail of the right kind of investors behind us.” He therefore craved the advice of Mr. Gauthier, noting that, “We want to meet with you for advice so that we make sure that when we go to such international fora, we will do the right thing and attract the right investors.”

Indeed, as the Minister pointedly noted, many a delegation from the country to a mining conference – usually a large retinue of government officials and their aides, some of which have little or no business with mining – have almost, always missed the mark when it comes to attracting the right kind of investment into the sector. Sada joked that, oftentimes, due to the large gathering of people from all over the world to such conventions, government officials are left bewildered and have been wont to pitching to the wrong crowd.

He remarked that reports of insecurity in some parts of the country were hardly to blame for the poor turn-out of investors. “For many years, in spite of negative reporting about some events in the international media, we are yet to hear reports of any investor that has packed up and left due to insecurity. So we know the challenge is deeper that what many perceive it to be within the sector. We intend to go and tell the story, and we will be very glad to answer any question that might come up about our industry,” Sada stated.

It should be noted that the drastic decline of mining prominence and contribution to the economy started with the discovery of oil in the late 1950s. The country has gone from being one of the world’s largest producer of Columbite and the sixth largest producer of Cassiterite (tin), to a net importer of solid raw materials for our industries, often with serious consequences.

During the period of neglect, for instance, the mining sector was beset with illegal mining, smuggling of gemstones and other high value minerals. Also, the country suffered from the loss of local and international expertise, loss of revenues in taxes and royalties and the degradation of the environment.

Over the years, government’s policy on mining has fluctuated from encouraging private sector participation to direct government participation (hence the establishment of the Nigerian Mining Corporation) and numerous other government agencies to regulate the sector. Officials have explained that government’s direct participation was principally driven by a need to fill the vacuum created by the exit of the foreign companies engaged in mining with the breakout of the Nigerian Civil war. However, what cannot be debated is that the once viable sector has been bogged down due to inefficient systems and practices and the immense opportunities missed to capitalize on the upswing of commodity prices.

However, over the past few years, government has shown its desire to revamp the sector and re-launch development of mineral resources as a viable option for the diversification of the economy. The Federal government has argued that due to its reform within the sector, the country is currently on the path to market-led or private sector orientation. “As a result of the government’s recognition of the critical role of mining, the good days in the mining sector are coming.
This recognition is even more so, given the direct link between solid mineral development and the Vision 20:2020 framework,” the Minister stated.

Observers of the mining and minerals sector in the country express worry that in spite of billions spent by government and international agencies to revamp the sector, mining in the country contributes less than three percent (the Ministry of Mines and Steel says that rate has increased recently to 11 percent) to the Gross Domestic Product (GDP).

As many stakeholders have been quick to state, there is really no doubt that the future of mining in the country is very bright. However, they note, the brightness of that future is predicated on the country’s ability to maintain the enabling environment necessary to attract investment capital that is fundamental to the development of the sector. Understandably, there is an indirect relationship between capital investment and risk. Mining investment is no different.

“From the Ministry’s perspective, we are beginning to see some dividends of the reforms that we have been implementing. It is also noteworthy that as we travel out for investor out-reach programmes, we have received significant responses from individuals and companies who are interested in mining our minerals directly, as well as partnering with our local miners,” the Minister observed.

According to him, a fundamental requirement for investors in the mining sector is access to geo-scientific data, relating to the location and estimate of the mineral resources. “Being mindful of this fact, we have completed airborne geophysical survey covering 100 percent of the country landmass, measuring magnetic and radiometric parameters,” Sada stated. He added that the country can now boast of over 3600 airborne geophysical maps of different scales and products aimed at mineralized targets all over the country.

He explained that the Ministry with the support of the World Bank is presently building the capacity of local miners which is critical to the pyramid structure of mining development. “Giving that it takes between seven to ten years for successful mine development, I have every confidence that the mining sector will take its rightful place in contributing immensely the nation’s sustainable development and the attainment of the objectives of Vision 20:2020.”

He added, “As we move forward on the various initiatives, having shifted paradigm from the direct-government participation model to the market-led model, as part of the reforms of the nation’s mining sector, we expect increased activity by private investors. Also, in our new role as regulator, government shall strive to avoid all negative consequences of market-led or private-sector driven mining by ensuring sustenance of the environment required for a robust mining sector.”