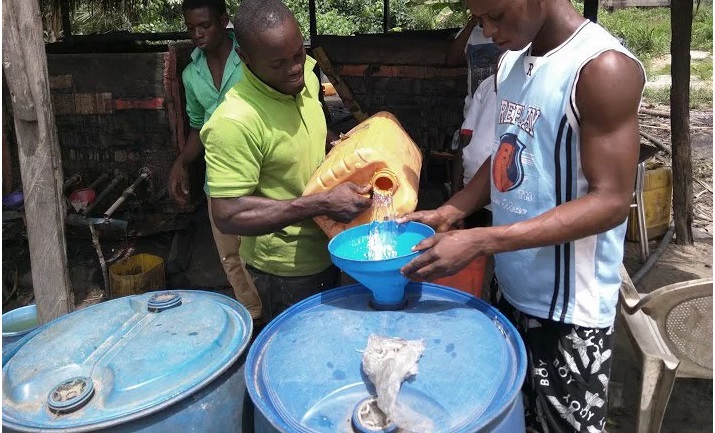 Lagos — In a bid to free the Lagos ports from any form of criminality, the International Ships and Ports Facility Security, ISPS, Code Implementation Committee, ICIC has concluded plans to propose to the Federal Government, the relocation of the Ogogoro village situated behind the Apapa Port complex, from its present location.

Indication are that the community may be infested with miscreants and criminals.

Speaking to Sweetcrudereports, the Chairman of the Committee, Engr Rotimi Fashakin, who described the nearness of the habitation to the Ports as unsightly, also said the most criminalities and attacks on vessels at berth were launched from the communities within the village.

Fashakin also said that the issue was considered at the last quarterly meeting of the Committee adding that the Committee had paid a fact finding visit to the habitation.

He stated: “Basically, what we do at the ICIC level is to discuss strategies that should be deployed around certain security threat prone areas around the marine environment.

“If there is a topical issue that affects unfettered implementation of the ISPS, we look at how we can mitigate against the insecurity in such area.

“We have had strong suspicion that most of the attacks on vessels at berth usually came from that village; so we feel that it is important that we should do reconnaissance around that area with a view to recommending what measure that government should take to be able to mitigate against the insecurity that is likely to come from the axis.

“Attacks on vessels at berth is giving the country a very bad image and we also try to recommend to NPA to fortify security around the waterfront like installing cameras and improving the lighting condition of that area.

“We may eventually think of advising government about Ogogoro village; maybe the same treatment that was given to the residents of Takwa Bay should be given the people in Ogogoro village, but I think it should be done tactfully to see how they can relocate the people.

We meet on a quarterly basis and the members are drawn from the maritime based agencies such as the Customs, Immigration, NNPC, NPA, NIMASA, Police which joined the Sub-Committee to Ogogoro village to carry out some checks.

On whether a good Corporate Social Responsibility could stem the tide of attacks originating from the village, Fashakin said that was neither here nor there adding that if some people have criminality as their only means of survival, no amount of CSR will stop them.

“Even for the image of the country, the location of that village is unsightly, we have been to ports of other countries; they are not like what we have in Lagos.

“The shanties around the port area can cause a lot of marine pollution; what was done to the people of Takwa Bay, the same treatment should be carried out in that village.

“If you had gone to Takwa Bay before the people were relocated, hardly will you find any household with a toilet; so where do they pass their excreta? They pass it into the same marine environment, and it is the same thing you find in this Ogogoro village.

“In other climes, what you find around the marine area is beautiful hotels and recreational spots; it is high time we begin to think along that line.

“They should be given a place away from this area and that is an option that we should not rule out as a nation if we are to improve our marine environment.”

He opined that both Federal and State Government can work in synergy to make this happen because this is about a national cause.