on: November 05, 2017In: Community Development, featured 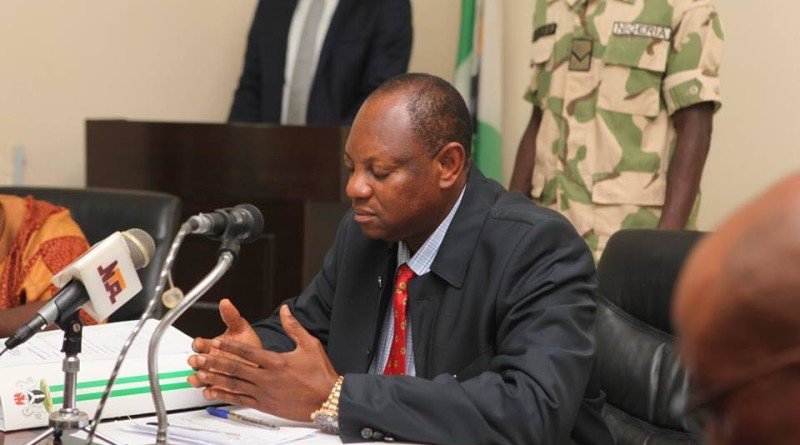 05 November 2017, Sweetcrude, Abuja – The Federal government has denied owing ex-agitators and students from the Niger Delta Amnesty programme who are currently studying at different schools abroad.

Special Adviser to the President on Niger Delta/Coordinator, Presidential Amnesty Office, Brig.-Gen. Paul Boroh (rtd), said the beneficiaries on the offshore programme abroad have been paid their school fees, up-keeps and other allowances.

Boroh disclosed this in a statement by the Director of Information, Amnesty Office, Mr Charles Dafe, in Abuja.

While debunking the allegations that the Nigerian Government owed some amnesty beneficiaries abroad their entitlements, he said that 90 per cent of the beneficiaries would graduate in December.

The coordinator also disclosed that the office would be left with only 10 per cent of the beneficiaries on scholarship abroad.

He said, “With our beneficiaries in onshore Nigerian universities including those on vocational training, our office if fully up to date in settling their educational and empowerment requirements.

“We have no funding issue in settling our offshore and onshore students. There are other developmental agencies for the Niger Delta region that have granted scholarships to students abroad and may have payment issues for their students, they are not sponsored by Presidential Amnesty Office,” he said.

Boroh said those alleging that the amnesty office had outstanding foreign students’ bills were peddling false information and were being unpatriotic to the sacrifices and efforts of the government.

He alleged that some of the changes he had introduced into the programme, like domestication of the programmes that did not require sending beneficiaries abroad, had precipitated unfair attacks by those it affected.

Other changes according to him include policy of strategic exit arrangement, which compelled beneficiaries that have been educated and vocationally empowered to quit the programme.

“These government well-considered changes or policies are meant to reduce government expenditure and are in the best interest of the country. The policy changes in the programme affected some students, who failed their studies and expect government to fund their endless time of studies.

“It also affected militants not originally captured in the programme pressurising to be part and those that have benefitted first degree but insisting that the programmes must see them up to doctorate degree level,” he said.

Meanwhile, students sponsored by the Office of the Presidential Amnesty Programme in the United States have commended the administration of President Muhammadu Buhari for sustaining the Amnesty Programme and the peace in the Niger-Delta region.

A statement by Jimmy Iwezu, leader of the Amnesty Students in the U.S., obtained by our correspondent in Abuja also dissociated the group from a planned protest at Washington, D.C., over the weekend.

“We wish to express our appreciation to President Muhammadu Buhari for his commitment and dedication to sustainable peace and development in the Niger-Delta through his support and continuation of the Presidential Amnesty Programme. We also wish to commend the able leadership of Gen. Paul Boroh (rtd) for the positive changes that he has brought to bear on the programme through prompt payment of our fees and allowances.

“While it has not been all rosy, we note that despite the economic recession that Nigeria went through, it was still able to sponsor our education abroad and we are very grateful,” the statement noted.

The statement also drew the attention of the public to the activities of those it called “a few faceless fraudsters” in the U.S.

It said the group was allegedly using the social media platform to spread “misleading and mischievous information about our welfare as government-sponsored students in different institutions of higher learning in the United States.”

“We wish to disassociate ourselves from any attempt to tarnish the image of Nigeria in the U.S. through outright lies, falsehood and blackmail being peddled in the social media by a faceless group that has called on people to join them on Saturday, November 4, 2017, for a public demonstration against the government of President Muhammadu Buhari at the White House in Washington DC, USA.

“For the avoidance of doubt, we wish to put it on record that our allowances and tuition fees have been paid up to the month of September, 2017 and the Amnesty Office has promised to pay up to November, 2017 when the next payment is made.”

The students appealed to those they termed “detractors and sponsored saboteurs” to desist from their evil activities of blackmail and distractions against the good job that the Office of the Special Adviser to the President on Niger-Delta has done since 2015.

“We also appeal to the Federal Government of Nigeria for the sustainability of the programme, which has achieved its mandate of ensuring peace and stability in the Niger-Delta region of Nigeria”.

Boroh said the Amnesty Programme was managing no fewer than 30,000 ex-agitators from the Niger-Delta region.The presidential aide said the programme, which started in 2009, had sponsored the beneficiaries in various skill acquisition, education and entrepreneurship trainings, among others.

He added that well over 5,000 ex-agitators had benefitted within the past two years in critical areas of aviation, maritime, oil and gas and agriculture.

According to him, the programme has helped greatly to stabilise the Niger Delta region, adding the Federal Government is consolidating on the achievements to buoy the economy.

Boroh had also said the Buhari’s administration was committed to a peaceful and developed Niger-Delta region, adding that this commitment had encouraged investors’ movement into the region.

“The impact of the Presidential Amnesty Programme in the Niger-Delta region has been very satisfactory and encouraging because the ex-agitators have imbibed that culture of ensuring peace.

“This is to allow for growth in the region and they are happy about it because a lot of valuable entrepreneurship programmes are ongoing in the entire Niger-Delta region.

“Their (ex-agitators) morale is high and they are happy. Each time I go to discuss with the ex-agitators and the youth, they pledge their loyalty and support to the present administration.

“This is so that the administration can continue the good things it is doing because of the commitment of Mr. President in ensuring peace, stability and development in the region.”