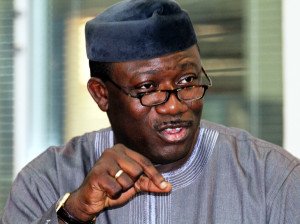 08 February 2018, Sweetcrude, Abuja – The Federal government has said it is determined to ensure predictability in its mining sector and boost local and international investments, adding that it has concluded arrangements to establish the Nigerian Mining Commission, to take charge of the regulatory role of the Ministry of Mines and Steel Development.

The Minister of Mines and Steel Development, Dr. Kayode Fayemi, who disclosed this at the Nigeria Day event at the ongoing African Mining Indaba, in Cape Town, South Africa on Wednesday, said the law setting up the commission is already with the National Assembly.

Mr. Fayemi spoke as Nigeria took the centre stage at the African Mining Indaba, with the formal presentation of its new Airborne Electromagnetic Survey Results amid endorsements for the country’s mining sector reforms by mining experts, operators and developmental agencies.

The presentation of the new Airborne Electromagnetic Survey Results, a major high point of the Wednesday event at the week-long mining conference, was witnessed by renowned stakeholders in global mining, including Deputy Minister of Mines and Minerals of Venezuela, Franklin Araque; Australian Ambassador to Nigeria, Paul Lehman; Nigerian High Commissioner to South Africa, Ahmed Ibeto; and the Permanent Secretary of the Ministry,

Others include representatives of top mining conglomerates, mining nations such as Canada, Zambia, Angola, South Africa and Senegal.

The minister said government was determined to strengthen regulation in the sector as well as ensure the improvement of its geological data.

He said the commission, which would be known as the Nigerian Mining Commission, would not only be the final authority on regulatory matters, but would also take charge of mining leases.

Mr. Fayemi, in an interactive session with investors and the media after the presentation of the new Nigeria Electromagnetic Survey results, said the delivery of the geological data, was in line with government’s desire to ensure bankable geological data, that would be an incentive to investors.

He stated further that the ministry would undertake more extensive electromagnetic Airborne Geological Survey of some promising parts of the country this year, as well as the completion of the National Mineral Database.

The minister said: “We want to ensure predictability, that is what we want to offer. We want to be a big mining designation.

“To achieve this, we have to put certain things in place, including provable data, sound regulations, capacity building for Artisanal and Small Scale Miners as well as access to funding.

He explained that while mining circle is not the same as electoral circle, it was important for government to put in place sound policies and reforms as well as bankable geological data that would make the Nigerian mining jurisdiction a major attraction.

The minister also hinted at government’s determination to enhance its collaboration with state governments and the host communities, a development which he said was being worked out administratively and through the establishment of the National Council on Mining and Minerals Development Council, where the states are playing active roles.

He was optimistic that the combination of the various reforms being put in place, inputs by the National Council on Mining and Minerals Resources Development and the Chamber of Mining would help to reposition the sector for better result.

He described Nigeria as a nation taking very bold steps towards becoming a major mining destination.

Also speaking at the event, Venezuela’s Deputy Minister of Mines and minerals, Franklin Araque, said the oil and gas rich country was also diversifying to mining in a bid to shore up its economy as Nigeria is doing, adding that the country has a lot to learn from Nigeria in its economic diversification efforts.

Mr. Fayemi, last December, disclosed that the ministry had secured the delivery of 26,000 line kilometre of electromagnetic data, following the payment of outstanding fees to the consultant that handled the project.

The consultants had held on to the results of the electromagnectic survey following the failure of the previous administration to effect payment for it.

The minister added that a good percentage of the N30 billion fund made available to the ministry from the National Resource fund, would be committed to exploratory work and data gathering.