Nigeria increases oil benchmark by $3 as Brent hits $39/b 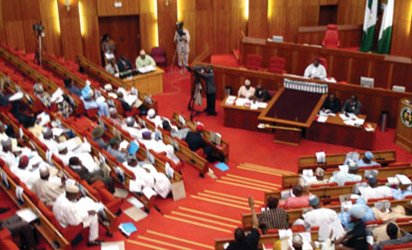 *Floor of the Nigerian Senate

Lagos — Nigerian Senate on Tuesday increased the oil benchmark in the country’s 2020 national budget by $3 upon seeing that International Brent had hit $38 per barrel on Monday.

The upper chamber made an increase in the oil price benchmark to $28 on hope that Brent would reach $40 per barrel soon.

The executive had earlier proposed $25 per barrel in the revised Medium Term Expenditure Framework, MTEF, and Fiscal Strategy Paper, FSP forwarded to the Senate for approval.

The Senate’s resolution was sequel to the consideration and adoption of report of its Committee on Finance mandated to work on the revised MTEF/FSP documents by the executive during plenary.

The Chairman of the Committee, Sen. Solomon Olamilekan, presented the report.

Brent surged as the Organization of Petroleum Exporting Countries, OPEC and its partners move closer to a compromise on extending current oil output cuts and are discussing a proposal to roll over supply curbs for one to two months.

OPEC+ agreed to cut production by 9.7 million barrels per day, or about 10 percent of global output, to lift prices affected by low demand due to lockdown measures at stopping the spread of the COVID19.

The group is likely to hold an online meeting on June 4, one week ahead of its usual meeting date from June 9-10.