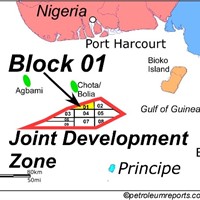 28 March 2017, Sweetcrude, Lagos – Nigeria and Sao Tome and Principe have so far spent over $129 million on the Joint Development Zone, JDZ, they formed 15 years ago to enable a rancour-free exploitation of oil and gas resources in the area within their maritime boundary.

The spent amount is out of the $302.6 million revenues generated from signature bonuses, sales of seismic data, licences and transfer fees from the zone, and was used to settle the operating expenses of the Joint Development Authority, JDA, located in Abuja, and which administers the JDZ.

Over the years, the venture has proved to be a drainpipe, as it is said to be running a hefty yearly budget of $12 million. Already, a United States-based firm, ERHC Energy Inc., which has an interest in blocks 2, 3, 4, 5, 6 and 9, has invested over $500 million into exploration activities without significant result.

The São Tomé and Príncipe’s 2014 Extractive Industries Transparency Initiative, EITI, report released recently, showed that since the JDZ was established, 43 percent of all revenue from the zone had been spent on the Joint Development Agreement’s operating costs.

For instance, EITI said over $129 million out of the $302.6 million revenues generated from signature bonuses, sales of seismic data, licences, transfer fees and others, were used to settle JDA operating expenses.

Oil majors have been withdrawing from the Zone due to uncertainty over the commercial viability of oil and gas resources in the area. Companies that have withdrawn include Total, which pulled out from Block 1 in August 2013, which was also previously abandoned by Chevron in 2010. However, after drilling two new wells in 2013, another oil company announced in July 2013 that the find was too limited to justify further investment.

Additionally, Sinopec and Addax were said to have also walked away from Blocks 2 and 4 for the same reasons.