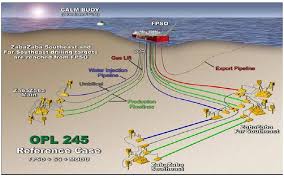 04 May 2017, Sweetcrude, Houston Texas — Strong indications have emerged that the Federal Government will go ahead with Zabazaba Deepwater project in Oil Prospecting Lease, OPL 245 regardless the controversies surrounding the oil bloc.

The Minister of State for Petroleum Resources, Ibe Kachikwu, said this in Houston Texas, U. S. while addressing journalists at a world press conference on the sidelines of the ongoing 2017 Offshore Technology Conference.

According to him, the project, which is to be carried out by the trio of the Federal Government, Shell, and the Nigerian Agip Exploration Limited, will go on as scheduled and the protracted dispute on the block with Malabu oil will not affect it.

Kachikwu statement is coming despite serious allegation allegations against top government officials, Shell’s acceptance of bribe giving, court cases in Italy, France and other countries amongst other controversies.

The Zabazaba Deepwater is a Greenfield offshore license bloc located in the OPL 245 in the Eastern portion of the Niger Delta with water depths ranging from 1,200 to 2,400 metres.

“Malabu continues to be a worry. It happened before this administration and it is in court. This matter is being handled not just in Nigeria; action is going on in France and some other countries, the facts are there.

“As a lawyer with years of experience, I try not to comment on this.

“There is a difference between recovering the illegal payments and dealing with the benefits of the block itself.

“The Zabazaba and other projects that have been signed on and so would have to go on. That has nothing to do with recovering the money. In recovering, the money we should keep trailing the money and get it.

“One of the things I have said to companies that are involved in this is that for me, once there is a question mark in terms of transaction you did, we will still look at it, and then you need to come clean to the stable.

The Minister disclosed that there would be a roundtable on the matter aside what the Economic and Financial Crimes Commission, EFCC, was doing.

“We need to talk because without any impact in terms of the project, which must continue, these are huge billions of dollars of investment in Nigeria, I am not going to shut that down. The issue of the criminality is outside my realm.

“My realm is doing two things: Make sure the investment go ahead so we can get returns, and two, get back the one billion dollars from wherever they said they have put it and give me back the money so that the Federal Government can have it back.”

“In fact, there are question marks, it is almost becoming apparent from all the data that we see that monies were paid, we will need to sit down with them.

“For me as a businessman, there is $1 billion that is lying out there, paid to the wrong person; we need to see how we can get that $1 billion and therefore give you a clean bill of health,” he explained.

On the issue of the Nigeria Liquefied and Natural Gas Train-7, the minister said gas investments were challenged worldwide but within the next 18 months, partners should take the Final Investment Decision (FID) to enable the project to proceed.

He said that the government’s recent payment of joint venture cash call debts to International Oil Companies (IOCs) would also boost the confidence of its investors to now proceed with the FID.

The Train 7 project, which stakeholders say is very significant to Nigeria’s economy, is expected to lift the total production capacity of gas and was formed to satisfy local requirements as a result of the shortage of gas but its progress had been hampered.
On Project 100, the minister said: “We need to develop a team, put parameters in place and hopefully in the next six weeks we should know.”

Project 100 is a concept conceived by Kachikwu to develop 100 projects to drive investments in the oil sector.