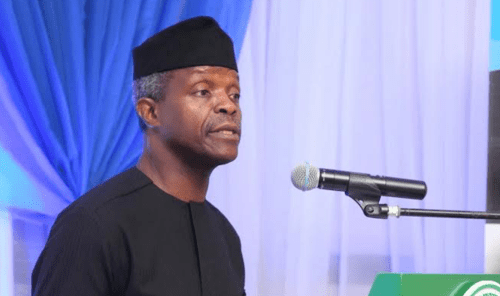 30 March 2018, Sweetcrude, Lagos — THE Federal Government has approved N90 billion for special economic zones across the country in line with its economic and growth plans, just as it is targeting N200 billion at the end of the concession period.

The government has also disclosed that the concession of the Lekki port project will run for 46 years.

President Buhari who was represented by Vice President, Prof Yemi Osinbajo also said the Lekki deep seaport project is a landmark project as it targets 4.7million containers annually when it becomes fully operational.

“I am delighted to be here this morning for the flag off of the Lekki deepsea port project and being a landmark project for several crucial reasons, the first is that the promoters of this project are targeting about 1.5 million Twenty Equivalent Unit, TEUs, container capacity annually.

“This expects to grow to 2.7 million and 4.7 million TEUs when the project’s operations commence.

“With this feat, the Lekki deep seaport will become one of the largest deepwater port in our region and serve as a hub for port operations for the whole of West Africa.

“And with all of the plan that they have for developing it, we expect that it will probably become the largest in Africa.

“We expect that when completed, the project will influence the generation of up to 170,000 direct and indirect jobs in the economy.

“The promoters I am told also plans to dredge the port channel to about 16 meters draft which is not currently obtainable in any seaport or any port for that matter in the country.

“This in itself is an indication that ships of larger size will now be able to visit the port and greater efficiency and economies of scale will generate significant revenue for the Nigerian economy with government earning a significant portion of it.

“In the past two budgets, we have provided an aggregate of about N90 billion for the development of special economic zones

“We are developing the Lekki Special Economic Zone as a model specifically targeting exports.

“The development of the Lekki deep sea port is mission critical to the achievement of the important objective of creating this special economic zone.

“The Nigerian Ports Authority and the Lagos State Government are the public sector partners their duty is to create the enabling environment for the private sector businesses to thrive.”

Earlier in her opening remarks, the Managing Director of the Nigerian Ports Authority, NPA, Ms. Hadeza Bala Usman said the agency will see to the timely completion of the project.