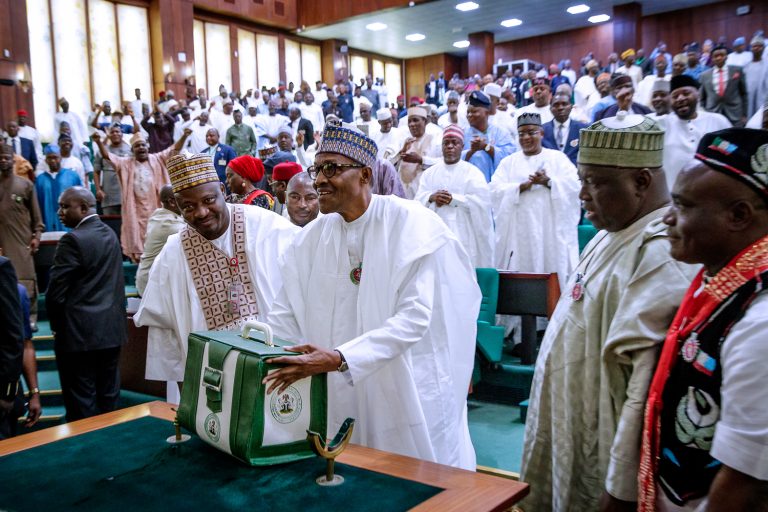 *President Buhari presenting the 2019 budget to the joint session of the National Assembly.

20 December 2018, Sweetcrude, Lagos — The federal government has earmarked a total sum of N305 billion for fuel subsidy in 2019. This was contained in the 2019 budget speech delivered by President Muhammadu Buhari at the joint session of the National Assembly in Abuja, Wednesday.

According to him, government’s revenue has “allowed” for N305 billion ($1 billion) for under-recovery by the Nigerian National Petroleum Corporation, NNPC on Premium Motor Spirit, PMS next year.

However, he said the amount is not cast in stone, as the government will “continue working to bring it downwards so that such resources are freed up to meet the developmental needs of our people.”

Unpaid subsidy debt had been a source of debate and agitations in recent times with oil marketers threatening to cause fuel scarcity if not paid. Out of the N800 billion subsidy carried over from the previous administration, the government last week Friday, offset the sum of N236 billion part-payment.

On why such fund would be set aside for subsidy, Buhari explained that it would be to “reduce some of the burden on Nigerians in a period of economic challenges where purchasing power is weak”.

“The problem with subsidies in the past is abuse and corruption. Today the government through the NNPC is the sole importer of PMS and therefore, the under-recovery is from the NNPC’s trading account. This means the possibility of some marketers falsifying claims is removed”, he said.

The estimate for non-oil revenue consists of N799.52 billion from Companies Income Tax, CIT, N229.34 billion from Value Added Tax, VAT and Customs Duties of N302.55 billion. We have reduced our expectation from Independent Revenues to N624.58 billion. Other revenues expected in 2019 include various recoveries of N203.38 billion, N710 billion as proceeds from the restructuring of government’s equity in Joint Ventures and other sundry incomes of N104.11 billion.