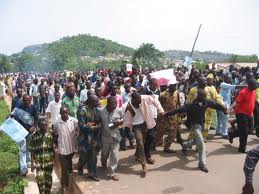 10 January 2012, Sweetcrude, ABUJA — The Nigerian Government has directed all federal civil servants to report to work as from Wednesday.
The Head of Service of the Federation, Alhaji Bello Sali, who gave the directive in Abuja, Tuesday, said security officers had been deployed to the various government offices to ensure their security.
He said government had discovered that many civil servants could not report for work due to lack of transport and, therefore, directed that the various Ministries, Departments and Agencies to provide staff buses for the transportation of workers to and from work.
It was also learnt that some government agencies had opened fresh attendance registers with a view to punishing workers who failed to report for work.

Fuel protests: Oyo declares 12-hour curfew
In a related development, following the intensity of the protests over the removal of fuel subsidy Tuesdayin Oyo State, Governor Abiola Ajimobi has declared a 12-hour curfew.

The curfew which was declared Tuesday is imposed on the state from 7am to 7pm.

Secretary to the State government, Alhaji Akin Olajide, in a statement, said the curfew was with immediate effect.

According to the statement, the curfew became necessary to protect the security and lives of the people of the state.

The government noted that some hoodlums and miscreants, under the sponsorship of some politicians, had been hiding under the present anti-fuel subsidy removal protest to threaten the security of the state, especially at night.

On the first day of the strike, some of the government property in Ibadan North West Local Government were destroyed by some miscreants who mixed with protesters.

To checkmate destruction of property and protect lives, the government explained it had to declare the curfew.

It noted further that government had instructed security agencies in the state to apprehend and prosecute anyone who contravened the curfew.

“While the government appreciates the rights of the citizens to protest, the protection of lives and property of citizens is imperative,” the statement said.

Meanwhile, some protesters numbering about 2,500 forced a popular radio broadcaster in Oyo state, Kola Adegoke to join them in the protest.

Kola Ladoke who broadcasts for Splash FM, was held hostage at Olomi area of the city.

He said, “Some of them said that if they delay me and prevented me from being heard on my radio programme, it will go a long way to tell the government how embittered they are to the oil subsidy removed from petroleum products. As I am speaking to you now, I am at Olomi with the protesters. Folake is the only one reviewing the papers now”.

The protests in Ibadan were more serious than the first day of the strike.

Unlike the Monday when some commuters could still meander and take alternative roads, all roads including the local ones were barricaded.

At Eleyele, a water tanker of the Nigerian Army was delayed by some irate youth who were playing football on the major road.

The driver of the truck had to plead with them before they allowed him to pass.

Most of the roads were deserted and blocked by the youths. Some commercial motorcyclists popularly called okada riders were turned back.