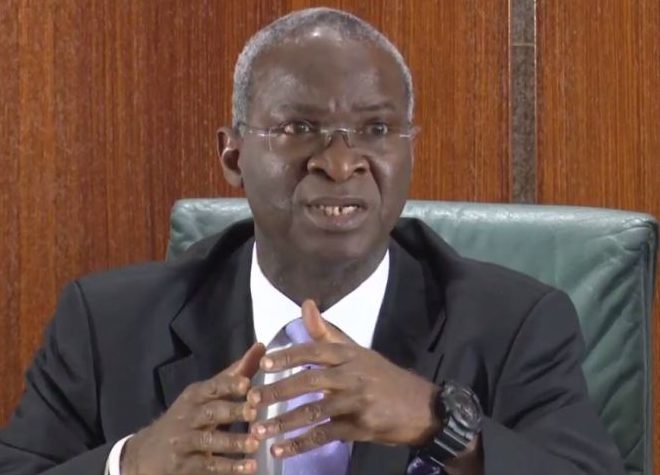 *Fashola says more rural communities to get access to electricity

14 December 2018, Sweetcrude, Lagos — The rural electrification plan has enabled the government to access about 200 million dollars to run a pilot in 70 communities in 5 States of the federation, minister of Power, Works, and Housing, Babatunde Raji Fashola has said.

The Minister made the remark when he received in audience, the Village Head of Gora Community in Karu Local Government Area of Nasarawa led by Hajia Kareen Fatimah Mohammed in his office, adding that the data of the communities yet to access electricity would be gathered so as to ultimately extend access to them.

According to him, the federal government is determined to provide critical infrastructure that will boost the economy as well as impact positively on the lives of Nigerians.

He said, “One of the reasons I have you here is that you are the faces of electricity under this Administration: a Dozen communities are having access to electricity whether on mini-grid or off the grid-like Gora community and this demonstrates that the government is working”.

He explained that President Muhammadu Buhari led administration is running an all-inclusive government by also appointing young people to leadership positions. He also said that young Nigerians under 40 years of age presently constitute the membership of the Board of the Nigeria Rural Electrification Agency (NREA) including the Managing Director, Mrs. Damilola Ogunbiyi, stating that “it is the young people who have done the work, the unsung heroes of Buhari’s government”.

Fashola said that apart from providing electricity to the Community, they are also connected to roads, rail, and bridges, maintaining that “what is good for the people in the cities, must be good for people in the rural communities”. He pointed out that the rural and farming communities are “the most critical pillars of the diversity of Nigerian government, being treasures store of food and construction materials.”

The Minister pointed out that Nigerians are now more united than ever before, adding that the projects such as this have connected men, women, and communities across Nigeria, citing the case of Hajia Kareem Mohammed who though hails from Gombe State, yet solicited for electricity for Gora Communities where her farm is located.