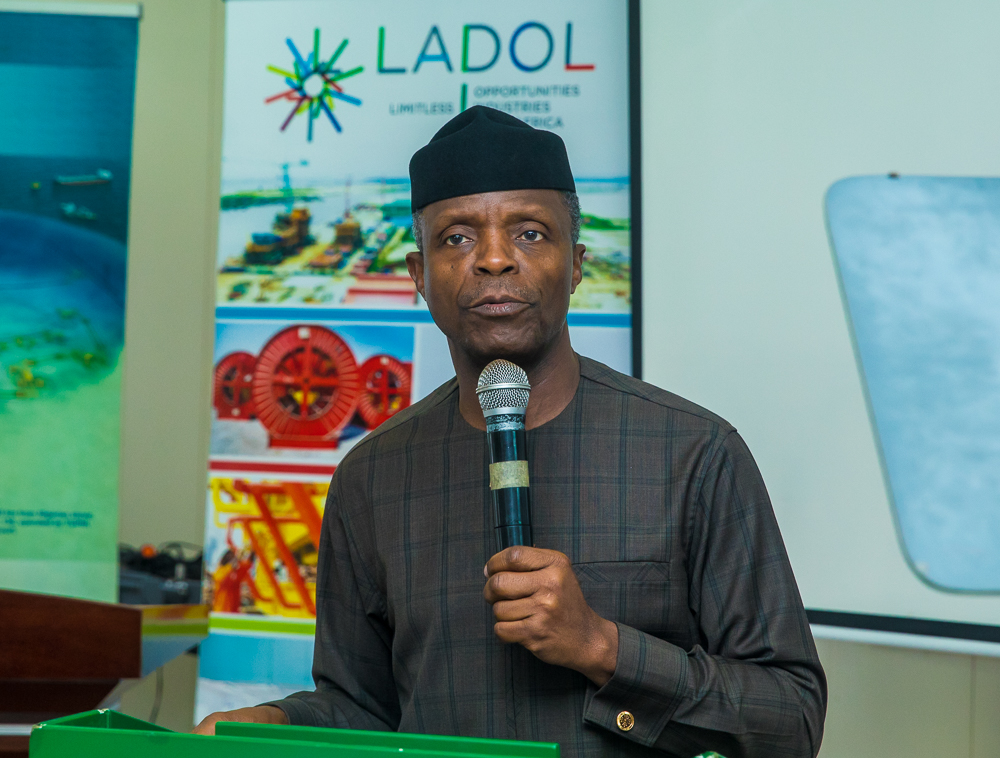 *Vice President Yemi Osinbajo at the Ladol base.

Mr. Osinbajo said this during a visit to the Lagos Deep Offshore Logistics, LADOL base on Friday.

According to him, the first order is the already running Nigerian Content Development and Monitoring Board, NCDMB, declining to mention the other newly signed executive order.

Explaining further, he said the move is to encourage new investments in the country and to ensure they (investments) benefits Nigerians.

He said the government alone cannot provide the funds needed for economic growth in the country, adding that the need for huge funds for development necessitates the involvement of the private sector.

Referencing LADOL as one of government’s local content initiatives in the country, Mr. Osinbajo said the company has been at the fore of anchoring developmental projects in the maritime, and oil and gas sector in Nigeria.

He debunked claims that government is breeding ground for a monopolistic market in both maritime and oil and gas sector.

According to him, the federal government “will never allow monopoly” in the sectors.

“…everybody wants monopoly but the federal government is not going to allow such. And that is why government’s policies have been opening the space for competition so the economy can grow: this is the right thing to do,” he said.

“But with what we are seeing on the ground in LADOL, we want to believe it will allow for other competitors to come into the sector,” he added.

In his presentation, the Chairman LADOL, Mr. Ladi Jadesimi said the company is geared towards the development of local content in the country and towards industrialization.

According to him, “what we at LADOL are focusing on is that from this point on, local content continue to increase and most of that increase will take place outside of LADOL.

“The EGINA project in terms of its local content has demonstrated to the entire world that the most complex industrial process in the world can be done in Nigeria and nothing should be allowed to overshadow that. Because that is the critical thing that will enable us to move forward and do more in the future and that is what matters,” he said.

“being the first project to be launched after the enactment of the Nigerian Oil & Gas Industry Content Development Act in 2010, the Egina project has by far the highest level of Nigerian content of any project in Nigeria and has set a new benchmark for the oil and gas industry,” he said.

He added that Total and its partners will continue to support all efforts by the government to grow the economy of the country for the benefit of her citizenry.