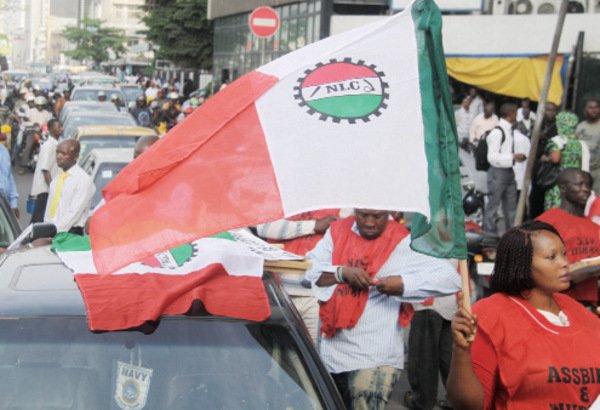 29 September 2018, Sweetcrude, Lagos/Abuja — A strike by Nigerian labor unions to demand a new minimum wage widened on the second day on Friday as more unions joined, shutting the port in the commercial capital, Lagos, as well as schools, banks, and offices in parts of the country.

The action started Thursday by the public and private sector labor coalitions grouped under the Nigeria Labour Congress, for blue-collar workers, and the Trade Union Congress, for managerial employees, also involves two influential unions in Africa’s biggest oil industry. The strike is to back demands for an increase of the minimum wage to 65,000 Naira ($179) a month from the current 18,000 Naira.

“The workers shut the gates to the ports since yesterday,” Ernest Ezenwe, a Lagos port agent, said by phone. “I’m at home as there’s still no work going on today.” All port activities across the country have been shut down, according to the president-general of Maritime Workers Union of Nigeria (MWUN), Adewale Adeyanju.

The Petroleum and Natural Gas Senior Staff Association of Nigeria, or Pengassan, joined the action but wouldn’t involve workers “on critical and essential services,” the manager-level union’s secretary general, Lumumba Okugbawa, said in an emailed statement.

Nigeria depends on crude exports for about 60 percent of government revenue and more than 90 percent of its foreign income.

Election Time
The strike could involve as many as 4 million workers, according to the NLC, and is coming in the middle of the election-campaign season with President Muhammadu Buhari seeking a second term in February elections.

Some disruptions at Lagos international airport were reported. “Flights are still working, aircrafts are still flying,” Henrietta Yakubu, spokeswoman at the Federal Airport Authority of Nigeria, said by phone. “It’s not a complete shutdown, they attempted to disrupt Lagos but flights are still operating.”

Nupeng, one of the oil unions representing junior workers, supports the strike, its president Igwe Achese, told reporters in Abuja. It wasn’t clear whether its affiliated workers, which include tanker drivers, would stop working. So far, oil operations didn’t seem to have been affected.

Failed Talks
The action followed failed talks on Wednesday in the capital, Abuja, between union leaders and Labour and Employment Minister Chris Ngige.

The “minimum demand” by the unions that the government should take steps toward setting a new wage benchmark for the country haven’t been met, leaving them no choice but to go on with the strike, according to Ayuba Wabba, president of the biggest coalition known as NLC.

The government said there was no reason for the strike to go ahead, with the labor minister saying a meeting scheduled to hold on Oct. 4 by the parties will resolve outstanding issues.