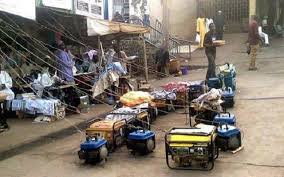 03 September 2016, Lagos — Due to irregular supply of public electricity, about N3.5 trillion ($21.9 billion) is spent yearly by businesses, families and others in Nigeria to buy fuel for power generation. Disclosing this yesterday at the ongoing 2016 Huawei Connect conference in Shanghai, China, the Business Leader (Distribution), Sahara Group, the firm with majority stakes in Ikeja Electricity Distribution Company, Rotimi Onanuga, said that in addition to the challenge, “the power infrastructure in Nigeria is aging.”

“Yet, due to the unstable power supply, manufacturing enterprises, trade enterprises and common families spend an annual average of N3.5 trillion to purchase diesel and gasoline for power generation,” he stated.

Onanuga said it was regrettable that the country is experiencing such a crisis, “given that it is the most populous country in Africa, boasting of a population of 173 million people, which accounts for 16 per cent of the total population of Africa.”

According to him, there are currently 5, 172, 979 power consumers in Nigeria, among which nearly 54.15 per cent (2.8 million) have no installed meters.He revealed that the IKEDC had been able to distribute 61, 000 meters within its area of coverage, but stated that the target is to distribute at least 300, 000 meters by April 2017.

According to him, some challenges are bedeviling Nigeria’s power generation capacity. He listed line loss rate and serious electricity theft as the major limitations.

“The line loss rate can reach up to 40 per cent, which is much higher than that of European and American countries, pegged at eight per cent.

“20 per cent of consumers committed electricity theft and difficulties exist in supervision and regulation,” Onanuga said.Earlier in his presentation, the Rotating Chief Executive Officer, Huawei Technologies, Eric Xu lamented the slow development of infrastructure in Africa, noting also that information technology is still at its rudimentary level.

Drivers are stunned that they never knew this. If you drive less than 50 mi/day, you better read this
According to Xu, Africa needs a new operating model to provide modern services for its populace.He said Huawei would provide better solutions to Africa, especially to governments that would help in the transformation of the continent.

The Huawei CEO, who disclosed that the firm, usually spends 12 per cent of its revenue on research and development, said countries should prepare to go digital or be left behind in the new phase of global development.

Cloud computing or technology is a type of Internet-based innovation that shares computer processing resources and data to computers and other devices on demand. It has been estimated by Market and Market, a leading research firm, to be worth over $121 billion.

To technology experts, who gathered at the opening of the 2016 Huawei Connect conference with the theme “Shape the Cloud”, it has become highly imperative for businesses and countries, especially developing ones to migrate to cloud technology and embrace disruptive technologies, including Internet of Things (IoT), 4G, 5G, among others for survival, growth and competitiveness.

At the event, which also has Nigeria’s Minister of Communications, Adebayo Shittu, among other government functionaries across the globe attending, it was pointed out that exploring cloud technology could help different industries and countries achieve digital transformation target faster.

Opening the conference, Huawei’s Rotating Chief Executive Officer, Ken Hu, said Information and Communications Technology (ICT) would be the cornerstone of an intelligent world. According to him, countries must strive not to be left behind, especially developing economies.