29 March 2012, Sweetcrude, Lagos – PETROLEUM Tanker Drivers, PTD, branch of the Nigeria Union of Petroleum and Natural Gas Workers, NUPENG, has said that Nigerians will for now continue to tolerate the tanker drivers, especially on the ever-busy Apapa Oshodi Expressway until the government provides enough parking space for the tankers.

Lagos Zonal Secretary of PTD, Comrade Adebayo Atanda, told Vanguard that though the union had been doing its best to manage the situation, any panicky measure or forceful ejection could lead to shortage of products. He, however, said the union had different sections that dealt with traffic control such as Vehicle Inspection Officers, VIO, and officers acting as traffic wardens.

Atanda said: “These VIOs are in charge of the traffic and at the same time examine the road worthiness of every tanker before it goes into the depots.We take a lot of precautions before vehicles that are going to the depots to load are allowed in, such as examining the tires, ensuring that their particulars are in order and that all other things that concern safety are in order. If you notice, our traffic wardens have uniforms. We gave it to them to control traffic, that is, vehicles coming into the depots to load. But we have some handicaps.

Major problem in the depots

“In these depots when they have products we experience a lot of traffic. The major problem in these depots, especially Ibafon, where we have, at least 30 private depots is that they lack parking spaces. Most of the depots, with the exception of Capital Oil that has a parking space by Rainbow Bus Stop, along Apapa-Oshodi Expressway, other depots have little or no park. In fact, those that have, their parks are not even in Lagos, some are in Oghere, Ogun State.

“If like five, 10 or 15 are loading at once, the service lane may not take all of them, there will be a spill over on the expressway because containers articulated vehicles and other heavy duty trucks also park on it on the service lane.

Those other vehicles are not under our control; obviously there will be chaos. However, if any of our drivers is caught disobeying traffic rule, we sanction them. What is painful is if drivers have moved from Ibafon to get to the depot, if we see that they are contravening any traffic law, we will turn them back.

They will not have opportunity to load that day. That is more than any fine you could impose on any driver. We ask such drivers to go back and start from the beginning. In Apapa, the depots in that axis are so many. If you look at it from the road you might believe there are just about five, ten depots or even 15 depots. But inside and at the back, there are so many depots in Ibru jetty.

“If we don’t want to cause shortage of products, we have to allow them park on the service lane and we have to tolerate them because for now the concentration of depots in that area is a major problem. Sometimes when the government gave us ultimatum and you saw that the tankers left the road and after awhile, they were back, it is not because we are doing ‘eye-service’. Sometimes, when the ultimatum is given, the depots might not have products or fewer of them might be loading. Like I said earlier, the problem is that the service lane the government allows us to use is also being used by containers and other trucks as well. We are only being made a scapegoat most of the time. If you go to the expressway today as we speak, you will see that the containers and other heavy duty trucks also line up there. If our drivers do not maneuver they will not be able to access the depots.

On Orile park, the Lagos PTD Secretary, said: “Orile can not contain the number of tankers that come to Lagos; there is no way the park can contain them. Oghere is also somewhere, it is also not sufficient. The problem is what we talk about it everyday, that almost every truck from all parts of the country comes to Lagos. Until the Federal Government does something and the State Government sees to it that more parks are provided, I am afraid that we will continue to live with the situation. On our side, we will continue to manage our people to the best of our capacity.” 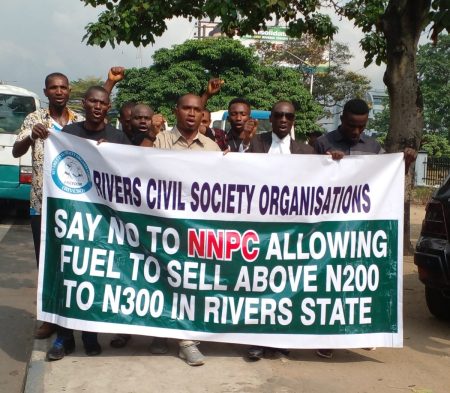