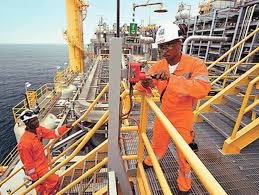 12 May 2016, Houston — Damage to a pipeline has reduced supplies of Nigeria’s benchmark Qua Iboe crude oil, two traders said on Thursday, the latest setback for Africa’s top producer that has pushed output to its lowest in more than two decades.

Operator Exxon Mobil Corp confirmed in an email that a drilling rig, experiencing mechanical difficulties, damaged the pipeline it jointly owns with the state-owned Nigerian National Petroleum Corporation, NNPC, and caused a spill on Sunday.

Exxon said Mobil Producing Nigeria, MPN, continues to assess the situation. It did not give any other details and it was not clear how much output was lost.

The drilling rig is owned by Depthwize Nigeria Limited and Drilling on behalf of Conoil Producing.

The news intensified concerns among traders and refiners about falling supplies of Nigeria’s largest grade of crude and helped boost global Brent benchmark futures on Thursday even as the market remains awash with supplies.

A series of recent outages in Nigeria have cut output by more than 400,000 barrels per day, excluding the latest problem with the pipeline, according to FG Energy.

The news comes as Nigeria’s production slumped to a 22-year low after Royal Dutch Shell PLC declared a force majeure on Bonny Light crude due to sabotage on a pipeline.

Last week, a group known as Niger Delta Avengers attacked a Chevron facility in the Delta after also claiming a strike in February against a Shell pipeline, which shut down the 250,000 b/d Forcados export terminal.

The U.S. East Coast, historically, has been among the world’s biggest buyer of Nigerian crude. Refiners there have binged on the country’s crude in recent months as economics have shifted in favor of waterborne barrels rather than buying from the U.S. Bakken shale heartland.